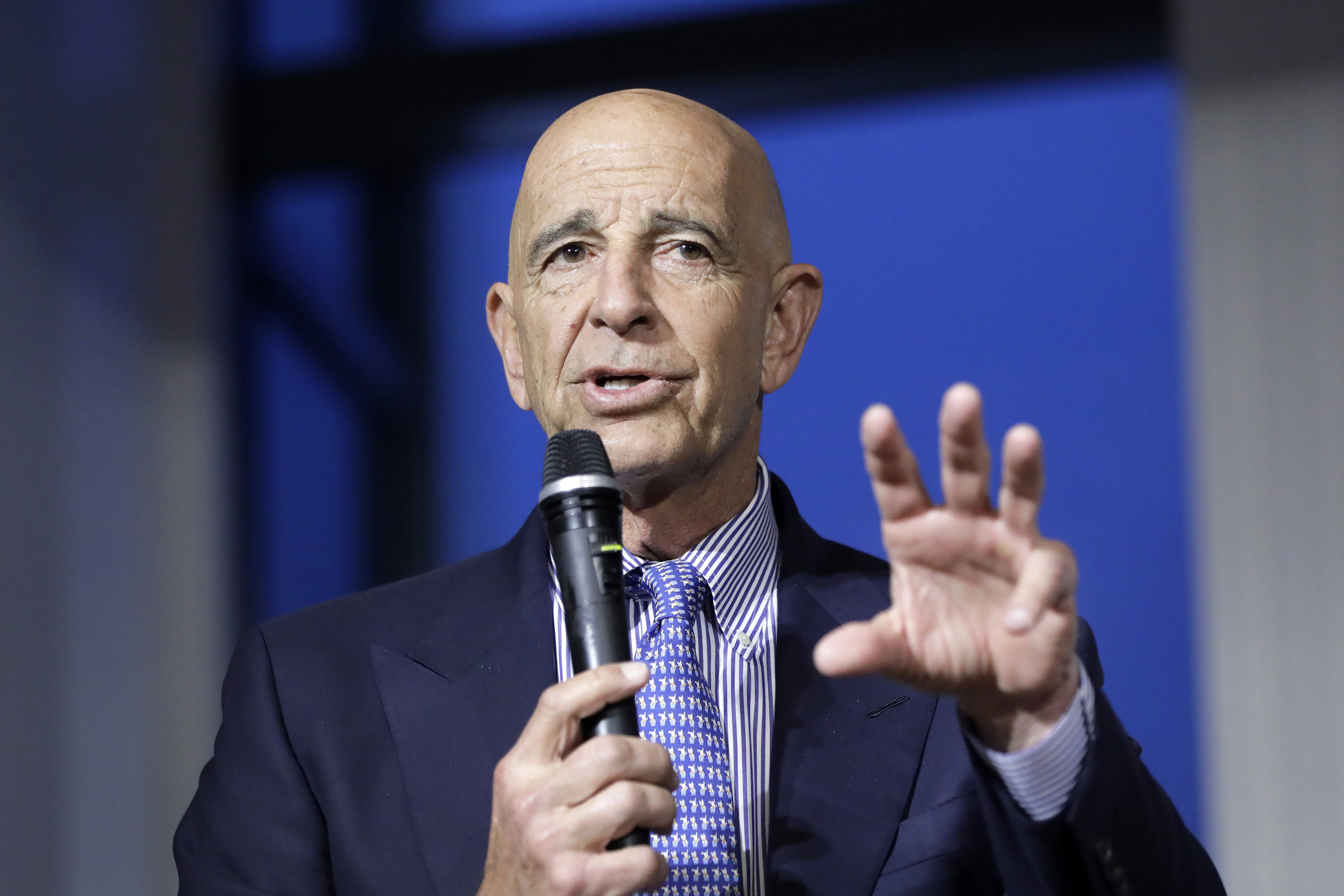 Thomas Barrack, a private equity investor who is a close friend of former President Donald Trump, was arrested Tuesday morning in Los Angeles on federal charges of illegally lobbying Trump on behalf of the United Arab Emirates.

Barrack, who was charged with two other men in a seven-count indictment in Brooklyn, New York, federal court, was chairman of Trump’s 2017 inaugural fund.

The Santa Monica, California, resident is accused with the other defendants of secretly advancing the interests of the UAE at the direction of senior officials of that country by influencing the foreign policy positions of Trump’s 2016 campaign, and then the foreign policy positions of the U.S. government during Trump’s presidency through April 2018.

Barrack, who never registered with the American government as an agent for the UAE, also is charged with obstruction of justice and making multiple false statements during a June 2019 interview with federal law enforcement agents.

The indictment noted that Barrack, 74, during that time covered by the indictment informally advised American officials on Middle East policy, and also sought appointment to a senior role in the U.S. government, including as special envoy to the Middle East.

Prosecutors said the “evidence of [Barrack’s] guilt in this case is overwhelming.”

Prosecutors also said that Barrack had also met with and assisted senior leaders of the Kingdom of Saudi Arabia, which is a close UAE ally, and that he “provided UAE government officials ‘with sensitive non-public information about developments within the Administration, including information about the positions of multiple senior United States government officials with respect to the Qatari blockade conducted by the UAE and other Middle Eastern countries.’ “

Grimes, who worked directly for Barrack at the Barrack-founded private equity firm Colony Capital, was arrested in California on Tuesday.

Grimes has a “close personal relationship” with Barrack, has taken more than 50 international trips on Barrack’s private plane, and lists Barrack’s $15 million home in Aspen as his primary residence, prosecutors said in a court filing.

“On multiple occasions, Barrack referred to [Al Malik] as the UAE’s ‘secret weapon’ to advance its foreign policy agenda in the United States,” the Justice Department said in a press release.

“In furtherance of the alleged criminal conspiracy and conduct, Barrack and Grimes, with the assistance of [Al Malik], acquired a dedicated cellular telephone and installed a secure messaging application to facilitate Barrack’s communications with senior UAE officials,” the department said.

Acting Assistant Attorney General Mark Lesko of the Justice Department’s National Security Division said, “The defendants repeatedly capitalized on Barrack’s friendships and access to a candidate who was eventually elected President, high-ranking campaign and government officials, and the American media to advance the policy goals of a foreign government without disclosing their true allegiances.”

“The conduct alleged in the indictment is nothing short of a betrayal of those officials in the United States, including the former President,” Lesko said in a statement.

Prosecutors in a memo seeking Barrack’s detention in Los Angeles pending his bail hearing in Brooklyn at a later date said that Barrack in communications with Al Malik “framed his efforts to obtain an official position within the Administration as one that would enable him to further advance the interests of the UAE, rather than the interests of the United States.”

“When the defendant sought a position as either U.S. Ambassador to the UAE or Special Envoy to the Middle East, he advised Al Malik that any such appointment ‘would give ABU DHABI more power!’ the memo said referring to the main city in UAE.

“Al Malik concurred that, if the defendant successfully obtained an appointment to such an official position, it would make the defendant ‘deliver more’ for the UAE, making their efforts a ‘[v]ery effective operation.’  The defendant agreed.”

Prosecutor noted that Barrack, who holds Lebanese citizenship, is extremely wealthy, has access to a private jet on which he flew to UAE in March, and has “deep and longstanding ties to countries that do not have extradition treaties with the United States” Lebanon, Saudi Arabia and the UAE.

A spokeswoman for Trump did not immediately respond to a request for comment on Barrack’s arrest.

Matthew Herrington, an attorney for Barrack, told CNBC that his client was arrested in Los Angeles “despite the fact that we’ve cooperated with this investigation from the outset.”

A spokesman for Barrack said, “Mr. Barrack has made himself voluntarily available to investigators from the outset. He is not guilty and will be pleading not guilty.”

Barrack stepped down as CEO of Colony Capital in 2020. He resigned as executive chairman of the firm in April.

Federal prosecutors have been investigating Barrack’s alleged work on behalf of UAE for at least two years.

One of the events that caught their attention was a speech about energy policy that Trump gave as a candidate for president in May 2016.

The indictment charges that Barrack “inserted language praising the UAE” into the speech, and “emailed an advance draft of the speech to [Al Malik] for delivery to senior UAE officials.”

For the next two years, prosecutors allege, Barrack “sought and received direction and feedback, including talking points, from senior UAE officials in connection with national press appearances Barrack used to promote the interests of the UAE.”

“During this time, Barrack never registered as a lobbyist for the UAE, as required under the Foreign Agents Registration Act,” the indictment says.

The indictment said that in December 2016, a month after Trump’s election, Barrack attended a meeting with Grimes, Al Malik and senior UAE government officials, where he advised them to create a “wish list” of U.S. foreign policy items that the UAE wanted to be accomplished during different time spans in the new administration.

The indictment also said that in the following March, Barrack and the other two men agreed to promote the candidacy of a person favored by top UAE officials for the position of U.S. ambassador to that country.

And in September 2017, Al Malik “communicated with Barrack about the opposition of the UAE to a proposed summit at Camp David to address an ongoing dispute between the State of Qatar, the UAE and other Middle Eastern governments, after which Barrack sought to advise the President of the United States against holding the Camp David summit,” the Justice Department noted in its press released. “The summit never happened.”

The UAE, where Trump maintained business ties prior to becoming president, established itself as a key relationship to the U.S. in the region during the Trump administration.

The UAE signed onto the 2020 Abraham Accords, which took steps toward normalizing relations between a handful of Middle East nations, including Israel.

Last November, then-Secretary of State Mike Pompeo announced that the Trump administration would sell more than $23 billion worth of military equipment to the UAE “in recognition of our deepening relationship” and the nation’s “need for advanced defense capabilities to deter and defend itself against heightened threats from Iran.”

A friend of Trump’s for decades, Barrack emerged as an early backer of Trump’s presidential bid long before many on Wall Street considered the real estate developer a serious contender for the White House.

By the spring of 2016 when Trump began to sweep primaries, Barrack and Trump’s daughter Ivanka Trump convinced him that he needed to hire a real campaign manager.

Manafort eventually rose to the position of Trump campaign chairman before he was forced to step down in August 2016 following reports of foreign lobbying he did on behalf of Ukrainian politicians. Both Manafort and Barrack hoped their cooperation in 2016 would accrue to each man’s benefit.

Barrack wanted to be appointed Middle East envoy in a future Trump administration. But after Trump won the White House, Trump’s son-in-law Jared Kushner intervened, and Barrack did not get the job.

Manafort, meanwhile, had hoped that Barrack’s connections in the Middle East would translate into lucrative business for Manafort’s lobbying practice.

But the years-long investigation by Special Counsel Robert Mueller put an end to the hopes of Barrack and Manafort to rise to positions of prominence in the Trump White House.

Questions about Barrack’s foreign lobbying first came to light during Mueller’s investigation, according to prosecutors.

By the end of his probe, Mueller had referred a total of 14 criminal cases to prosecutors, most of which remain sealed to this day.

In 2019, Manafort was found guilty by a jury of eight felonies related to foreign lobbying and tax evasion. He served just under two years in prison and was released in June of last year.

COVID 19: Top measures a diabetic can take amid pandemic

Covid-19: Food discounts offer to boost youth jabs and one in five firms to cut jobs over furlough