Cash-strapped telco Vodafone Idea’s proposal for investment of up to Rs 15,000 crore through foreign direct investment (FDI) has been approved by the Union government, according to officials. A top-level group, comprising representatives from the ministries of home affairs, external affairs, finance and commerce and industry, took the decision.

The nod, which is an enabling provision, would help the financially-stressed company raise funds to pay up some of its dues linked to adjusted gross revenue (AGR), reduce debts and use the money for operational expenses. This comes at a time when the company has approached the government seeking relief in payment of certain dues. An official in the Department of Telecom (DoT) said it’s a move indicating that the government does not want Vodafone Idea to go under.

The company did not respond to queries. But, last September, it had said in a regulatory filing that the board of directors of the company had approved raising of Rs 15,000 crore each through issue of equity shares of various forms and debt, with the total aggregate amount not exceeding Rs 25,000 crore.

Stuck with debt amounting to Rs 1.8 trillion (including deferred spectrum payment obligations of Rs 96,270 crore, AGR liability of Rs 60,960 crore and loans of Rs 23,080 crore) as on March 31, 2021, Vodafone Idea had recently asked the government for a one-year moratorium to clear spectrum instalment of over Rs 8,200 crore payable in April 2022. During a hearing in the Supreme Court, it cited the steep AGR payout and accumulating dues for its inability to make the payment. It had also mentioned challenges it was facing in raising funds as investors were wary about the low consumer tariffs and resulting poor health of telcos. The company was arguing its case in the court that the AGR dues calculated by the DoT were much higher than what they should have been. 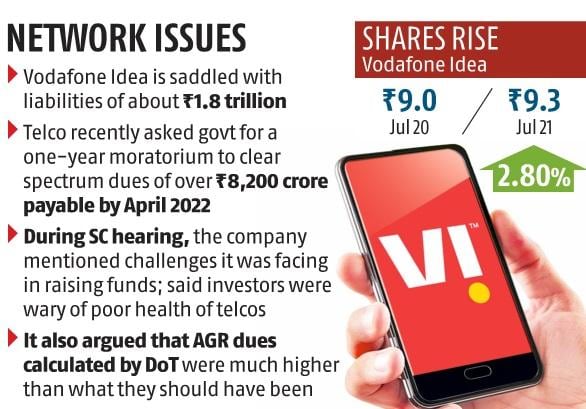 British telecom major Vodafone has been in the midst of a tax dispute with the Indian government for long. This dates back to Vodafone buying Hutchison Whampoa’s controlling stake in Hutchison Essar for $11 billion in 2007, and the Income Tax Department serving a notice on the UK telco for failure to deduct a withholding tax. A retrospective tax of Rs 22,100 crore was imposed on Vodafone plc. Last September, Vodafone won the arbitration at The Hague with the tribunal ruling that India’s imposition of the tax liability was a breach of the India-Netherlands bilateral investment treaty. Earlier this year, India appealed against the verdict.

Vodafone Idea cut down its net loss by 39.5 per cent year on year in the fourth quarter FY21 to Rs 7,022 crore on the back of lower operating and exceptional expenses. In the same quarter of the previous year, it had posted a net loss of Rs 11,643 crore.

On July 19, SC reserved the order on petitions by Bharti Airtel and Vodafone Idea seeking correction of errors in the AGR demands by the DoT.

No Proposal To Grant Full Statehood To Lakshadweep: Centre

Chhattisgarh Government To Provide Rs 6,000 Per Year To Landless Families