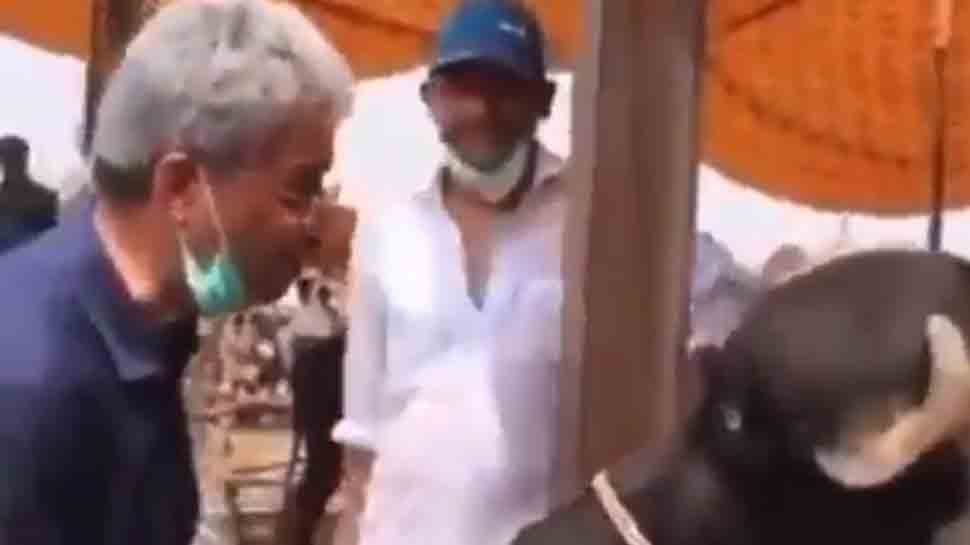 New Delhi: Pakistani reporter Amin Hafeez, who is popular for his funny reporting skills, is back again to doing what he is at best, his hilarious interviews. The video was shared on the occasion of Eid-ul-Adha or Bakrid.

The entertaining video has been shared by journalist Naila Inayat, who captioned the clip with, “Now what is Eid without Amin Hafeez interviewing cattle?” In the video, Amin is first seen asking the buffalo, “Lahore kaisa laga aapko? (How do you like Lahore?)”. Interestingly, to this, the buffalo is seen replying with a small ‘moo’.

After receiving the grunt from the animal, Hafeez looks back at the camera and says, “Lahore acha laga… waah ji waah (The buffalo likes Lahore).”

The anchor then goes on to ask, “Bataiye Lahore ka khaana acha hai ya aapke gaaon ka khaana acha hai? (Which food do you prefer? The one in Lahore or back in your village?)” The courteous buffalo once again acknowledges the interviewer and replied with a sound. Totally amused with the courteous behaviour, Hafeez concludes the video saying, “Haan kehti hai Lahore ka khana acha hai (Yes, it likes Lahore’s food).” The viral clip was tweeted by journalist Naila Inayat and received plenty of views as expected.

Now what is Eid without Amin Hafeez interviewing cattle.. pic.twitter.com/5r2sfh5Ua7

Earlier last year, Hafeez made headlines with a special segment wherein the journalist was dressed as a royal emperor brandishing a sword and reading the news before signing off for Geo News, Lahore.

This video of Hafeez was shared by journalist Naila Inayat on Twitter. Since then, the video has been circulating across all social media platforms and gathering different views from people.