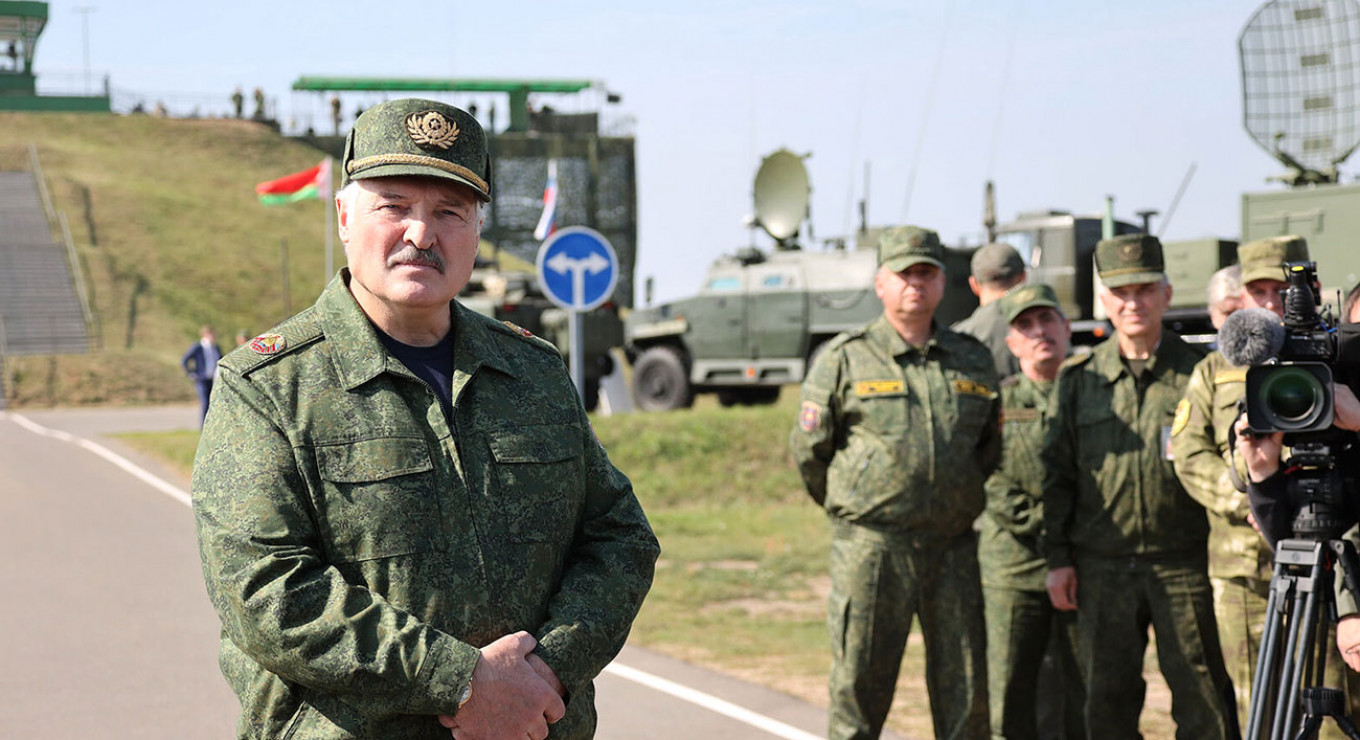 Sporting green military uniform at a test range near the city of Baranovichi in western Belarus, the strongman praised Russian and Belarusian troops for their “high state of readiness” to jointly defend their borders and counter what he called “hybrid aggression” from the West.

On Friday, Russia and Belarus launched military drills involving about 200,000 personnel, one of Moscow’s biggest exercises in recent years.

President Vladimir Putin is scheduled to inspect the drills in Russia on Monday, ahead of three-day parliamentary elections later this week, the Kremlin said.

“We cannot relax, taking into account the experience of 1941,” Lukashenko said, referring to the invasion of the Soviet Union by Nazi Germany.

Lukashenko, who has been ostracized by the West for cracking down on opposition protests following a disputed election last year, has had to increasingly lean on Moscow. The two leaders have been in talks to integrate their two countries more closely.

Lukashenko held the latest round of discussions with Putin in Moscow earlier this week and said on Sunday he wanted to buy Russia’s S-400 air defense systems with a view to placing them on his country’s border with Western-backed Ukraine.

“We should get ready — our border with Ukraine is 1,200 kilometers (750 miles),” Lukashenko told reporters during the exercises, revealing details of his eight-hour talks with Putin.

“And we discussed that we could use the S-400s,” he said, adding that the leaders had dedicated more than three hours to issues of defense and security.

Lukashenko also thanked Putin for agreeing to supply Belarus with weapons valued at more than $1 billion by 2025.

“I will not disclose the sum although this is also not a huge secret — that’s more than a billion dollars,” Lukashenko told local reporters.

At the drills, Lukashenko hailed Russian and Belarusian troops.

“Your actions during the exercises vividly confirmed a high state of readiness of the armies of our countries and the Belarusian people to jointly secure their sovereignty and independence,” he said.

The massive drills have rattled a number of EU countries, with Poland introducing a state of emergency along its eastern border, the first time the measure has been used since the fall of Communism.

Polish Prime Minister Mateusz Morawiecki has warned of possible “provocations” and said the exercises were one reason Warsaw introduced the state of emergency.

On the eve of the exercise, Putin said the drills were “not directed against anyone” and Lukashenko struck the same note on Sunday.

“We are not aiming our rockets at neighboring countries. We are getting ready to defend our land,” he said in remarks released by his office.

“The Belarusian-Russian union does not need extra lands.”

Putin is expected in the Belarusian capital Minsk to sign a raft of integration agreements on Nov. 4, and Lukashenko said the two would also hold talks next month.

The Kremlin said troops from India, Mongolia, Armenia, Kazakhstan and Kyrgyzstan would also take part in the joint exercises.

The Russian Defense Ministry said on Sunday the two countries’ troops would return to their bases by mid-October.

Biden gets Covid-19 booster live on air, says US will have a ‘problem’ until 98% of Americans are vaccinated

Some 9,400 illegals tried to cross into Poland from Belarus since August — Polish minister

Coronavirus: Social distancing to end in shops and theatres