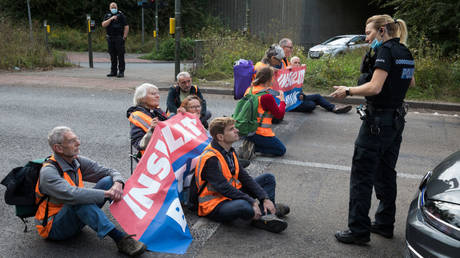 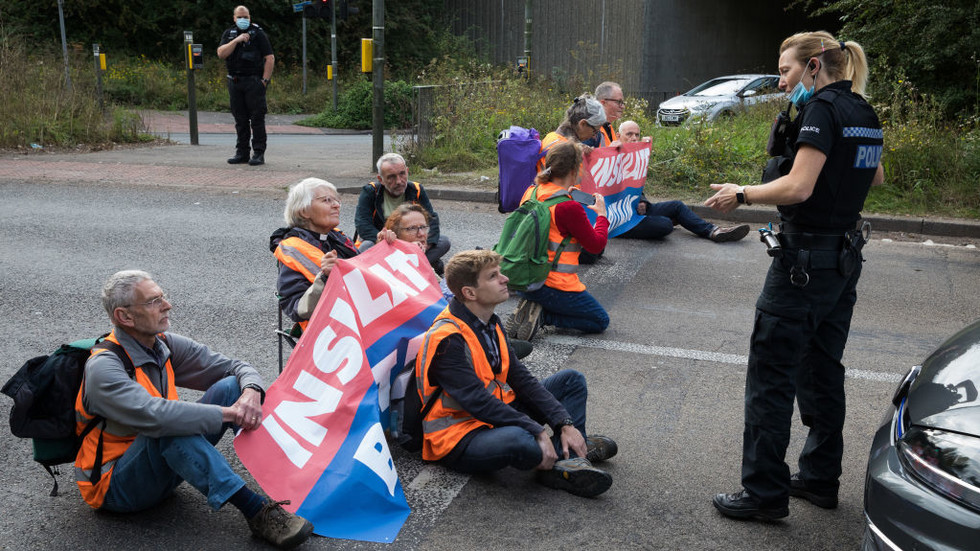 Climate change demonstrations have blocked junctions around London’s orbital motorway, causing tailbacks and frustrating thousands of commuters and tradesmen in a bid to get the government to commit to insulation initiatives.

On Monday, protesters from Insulate Britain blocked junctions around the M25 motorway, demanding action from the government on home insulation, deemed an important part of the fight against climate change.

“We are demanding the government and Boris Johnson create hundreds of thousands of jobs, lower our emissions, and save lives,” the group said in a tweet.

Essex police told the BBC that 11 people had been arrested for obstruction of highways. The protests also involved Kent, Surrey and Hertfordshire.

In footage and photos shared online, the protesters can be seen sitting cross-legged on the motorway and by slip roads leading to the huge ring road.

However, the thousands of motorists stuck in standstill traffic behind the blockade certainly aren’t warming to Insulate Britain and their objectives. In one video, an angry driver can be seen getting out of his car and dragging a seated protester away from his line.

Others took their frustration out on Twitter. Seemingly one person stuck at the front of the queue was a thermal insulation engineer, whose Monday morning work was interrupted by protesters.

A mate is stuck in this, the irony is we are Thermal Insulation Engineers (Laggers) who have been insulating Britain for decades but can’t get to work because of Insulate Britain protests pic.twitter.com/UhdybIlptc

Some people claimed the action was always going to be unpopular. One person said the demonstration would make it even more difficult to associate with climate change activists, adding that the protesters were “retarded.” Others agreed, with one labelling the protesters “soap dodgers” and saying they should be campaigning outside Parliament and not ruining the days of working men and women.

“I would have thought keeping cars stationary with their engines running would not exactly be good environmental practice,” another person wrote, questioning whether the protest had really been thought through.

Political commentator Kevin Edgar concurred, claiming he was “sick” of these people constantly disrupting our lives. “I certainly can’t see how it’s helping any cause,” he wrote, adding that their actions were undoubtedly wrong.

Another person claimed the group was being protected from drivers by the police, noting that anti-lockdown demonstrators don’t get that kind of support. He shared an image of the police holding a line in front of the seated protesters.

Author Matthew Todd also said he was angry about the actions taken by Insulate Britain, but claimed he was even angrier that the British media had not thoroughly explained the impending climate disaster. “What the hell are we going to say to our kids?” he added, sharing a link to a Sir David Attenborough video.

While most people condemned the climate group, a few people admired their work. “Applauding Insulate Britain for the very specific goal. Every news outlet talking about insulating buildings,” one Twitter user wrote, adding that they wouldn’t pass judgement on their tactics.

London was hit by a two-week protest by Extinction Rebellion in August and early September. More than 500 were arrested during the fortnight.

UK eases rules of entry for travelers from other countries, including Russia