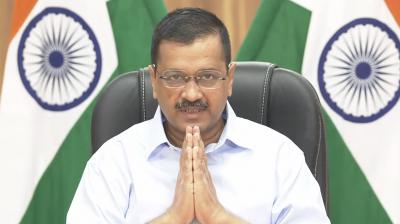 New Delhi/Lucknow: Delhi chief minister Arvind Kejriwal was unanimously elected as the Aam Aadmi Party’s national convener for the third time in a row at the party’s national executive meeting on Sunday. The decision comes at a time that the AAP is expanding its wings beyond the national capital and is preparing for Assembly elections in six states — Punjab, Uttar Pradesh, Uttarakhand, Himachal Pradesh, Goa and Gujarat — in the next two years. Delhi will also hold municipal polls next year with the three civic bodies in the city now run by the BJP.

Asserting that the AAP will contest all 403 Assembly seats in UP, Rajya Sabha MP and senior AAP leader Sanjay Singh said it would be a mistake to consider his party a minnow as it had emerged “stronger” than the Congress in the recent panchayat polls. The Arvind Kejriwal-led AAP made it clear it was not in talks with any other party for an alliance in next year’s UP Assembly polls.

“Our party is stronger than the Congress in the state. While the Congress won 40 seats in the panchayat polls, we won 83 panchayats. The AAP got over 40 lakh votes in these polls, and 1600 party candidates contested,” Mr Singh, the AAP’s UP in-charge, told PTI in Lucknow. The Congress was reduced to seven seats in the 403-member UP Assembly in 2017.

After coming to power in Delhi, the AAP has emerged as the main Opposition party in Punjab and is trying to expand in other states like Goa, Uttarakhand and Gujarat. “We are preparing to contest all 403 seats in UP. We are at present not in talks for an alliance with any other party. Our focus is to strengthen our base and in the past one and a half months, we have made over one crore members,” Mr Singh said.

The AAP has already spread its wings in several states. Earlier this year, the party won 27 seats in the municipal polls in Gujarat’s Surat.  It is the ruling party in Delhi, where it won 62 of 70 Assembly constituencies in February 2020. It is also the principal Opposition party in Punjab.

On Vijay Rupani’s resignation as Gujarat chief minister, AAP national spokesman Raghav Chaddha claimed his party’s growing influence in the state had forced the BJP to take this decision. “Be it Uttarakhand or Gujarat, where the AAP has entered, the BJP had to change the chief ministers. They changed the chief minister in Uttarakhand several times.”

Earlier this year, the party’s constitution was also amended to allow a person to hold a post more than twice. The party constitution earlier said that “no member will hold the same post as an office-bearer for more than two consecutive terms of three years each”. After the amendment, made in January 2021, the duration of the term has been raised to five years and the bar on the number of terms for office-bearers was lifted.