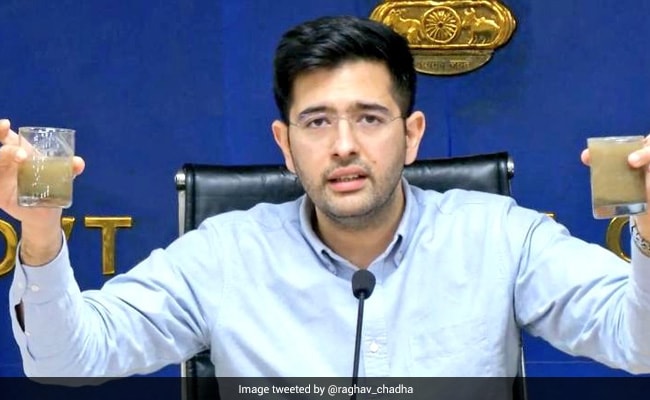 AAP spokesperson Ragha Chadha is to hold a press conference at 1.30 pm (File)

The Aam Aadmi Party has received a “love letter” from the Narendra Modi government’s “favourite agency”, AAP leader Raghav Chadha tweeted sarcastically on Monday morning, as he explained that the party had been served a notice from the Enforcement Directorate.

Mr Chadha, whose party is set to contest next year’s Punjab and Uttar Pradesh elections against the Bharatiya Janata Party, said he would hold a press conference at 1.30 pm “to expose the political witch hunt of AAP by a rattled BJP”.

“In a first, AAP receives love letter from Modi government’s favourite agency – Enforcement Directorate. I will address an important press conference (at) 1.30 pm at AAP headquarters in Delhi – to expose the political witch hunt of AAP by a rattled BJP,” he tweeted.

I will address an important press conference today, 130pm at AAP Headquarters in Delhi – to expose the political witch hunt of AAP by a rattled BJP.

Mr Chadha’s caustic reference to a “love letter” from the Enforcement Directorate – which investigates financial crimes and is part of the Union Finance Ministry – was a nod to Shiv Sena MP Sanjay Raut’s swipe at the Modi government last month.

Speaking after party colleague and Maharashtra minister Anil Parab was asked to appear before the agency, Mr Raut accused the government – as several other opposition leaders have over the past months – of using the central agency to attack its political opponents.

“(The) frequency of such love letters has increased after unsuccessful attempts to breach the wall of the Maha Vikas Aghadi (MVA) which is strong and impregnable,” Mr Raut declared.

Mr Raut’s remarks were echoes of those by several opposition leaders, including Bengal Chief Minister Mamata Banerjee, former J&K Chief Minister Mehbooba Mufti and Sharad Pawar, whose NCP is allied with the Shiv Sena and the Congress in Maharashtra.

Mr Pawar last week called the multiple probes by the Enforcement Directorate “an attempt to encroach upon state’s rights… and discourage opponents by using these agencies as tools“.

Ms Mufti, whose mother was questioned for nearly three hours last month, had said: “… institutions supposed to protect our rights and uphold the Constitution have been Talibanised“.

These and other opposition leaders have hit out at the government for using central investigative agencies to harass and intimidate its critics, political or otherwise.

Last week Ms Banerjee hit out at the government over summons to her nephew and Trinamool Lok Sabha MP Abhishek Banerjee over an alleged coal mines scam.

She pointed out that others (she was referring to Suvendu Adhikari, the ex-Trinamool, now-BJP MLA) had not been summoned, despite being named in charge sheets.

“The BJP is pursuing vendetta politics and is targeting Abhishek Banerjee…. As soon as by-poll dates are announced… Trinamool leaders are being summoned by (central) agencies,” she said.

REC gets shareholder nod to raise up to Rs 85,000 cr via bonds, debentures

Coronavirus: Social distancing to end in shops and theatres