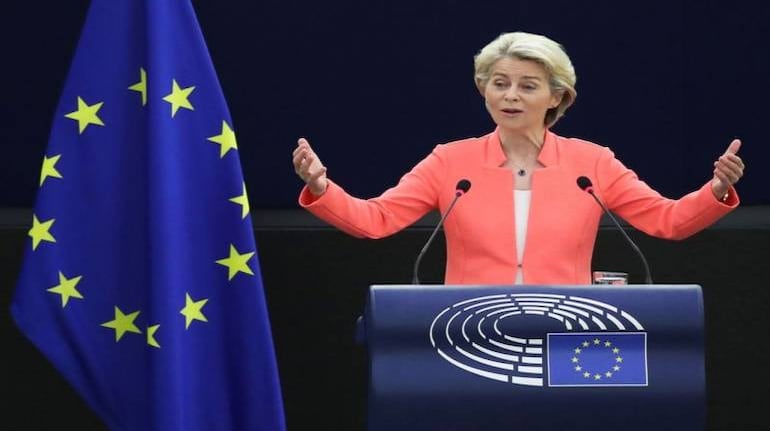 The European Union’s chief executive set out plans on Wednesday to make the 27-nation bloc more independent in areas from defence to global trade, and urged other countries to join it in accelerating the fight against climate change.

Ursula von der Leyen proposed the EU agree a “Chips Act” to ensure semiconductor self-sufficiency, counter China’s global infrastructure push and find the political will to intervene militarily around the world without the United States.

“Europe can and clearly should be able and willing to do more on its own,” she told the European Parliament in Strasbourg in her annual state of the union speech.

Seeking to draw inspiration from Beatrice Vio, an Italian Paralympic champion who joined her in the assembly, she quoted her motto: “If it seems impossible – then it can be done.”

During von der Leyen’s two years as president of the executive European Commission, the EU’s resilience has been tested by the coronavirus pandemic, a related economic downturn, strains over Britain’s departure and weakening rule of law in some eastern member states.

Critics say she and her team have not carried out promises to make the Commission more “geopolitical” as the EU struggles to assert its influence in foreign affairs and global trade.

The proposal to ensure EU semiconductor self-sufficiency follows a CHIPS for America Act in the United States, aimed at boosting U.S. capacity to compete with Chinese technology.

Von der Leyen also announced a plan for Europe to establish partnerships in infrastructure through a “Global Gateway” to counter China’s Belt and Road Initiative.

“We’re pretty good at financing roads, but it doesn’t make any sense for Europe if we build a perfect road between a Chinese copper mine and a harbour that’s Chinese-owned,” she said. “We are entering a new era of hyper-competitiveness, an era in which some stop at nothing to gain influence.”

One month after the Taliban took control in Afghanistan, von der Leyen called on EU states to build forces that can intervene militarily abroad without U.S. support.

“What has held us back until now is not just shortfalls of capacity, it is a lack of political will,” said the former German defence minister, whose country has been reluctant to deploy troops into combat around the world.

While U.S.-led NATO has long shouldered the military burden in Europe, China’s rise, a more aggressive Russia and U.S. calls for Europe to do more for its own security are pushing the EU to develop a more forceful foreign policy.

She proposed waiving value-added tax on weapons developed and sold in the bloc by EU governments, establishing a joint situational awareness centre to improve intelligence-sharing, and better defences against cyber attacks.

She also pledged to increase financial support to help poorer countries fight climate change and adapt to its impacts by an additional 4 billion euros ($4.73 billion) until 2027.

Urging others also to do more, she said: “Closing the climate finance gap together, the U.S. and the European Union, would be such a strong signal for global climate leadership.”

Warning against “a pandemic of the unvaccinated”, she said the pace of COVID-19 vaccination must be quickened.

About 70% of the EU’s adult population has been fully vaccinated, but there are big differences among member states.

She also announced a donation of 200 million vaccine doses for third countries by mid-2022, on top of a previous commitment for 250 million shots.