Whether for bread, rice or tortillas, governments across the world know that rising food costs can come with a political price. The dilemma is whether they can do enough to prevent having to pay it.

Global food prices were up 33% in August from a year earlier with vegetable oil, grains and meat on the rise, data from the United Nations Food and Agriculture Organization show. And it’s not likely to get better as extreme weather, soaring freight and fertilizer costs, shipping bottlenecks and labor shortages compound the problem. Dwindling foreign currency reserves are also hampering the ability of some nations to import food.

From Europe to Turkey and India, politicians are now handing out more aid, ordering sellers to cut prices and tinkering with trade rules to mitigate the impact on consumers. 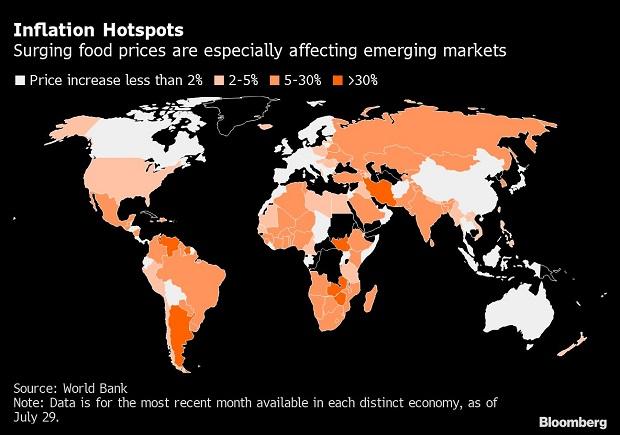 The issue is more acute in emerging markets where the cost of food accounts for a greater chunk of household spending, and in crisis-hit nations. In Lebanon, militant group Hezbollah has tightened its grip on the country by distributing food. But even the U.S. is taking action to address affordability made more urgent during the coronavirus pandemic.

“Governments can intervene and commit to supporting lower consumer prices for a while,” said Cullen Hendrix, non-resident senior fellow at the Peterson Institute for International Economics, a Washington-based think tank. “But they can’t do it indefinitely.” Food inflation spurred more than two dozen riots across Asia, the Middle East and Africa, contributing to the Arab Spring uprisings 10 years ago. Pockets of discontentment are growing again. Unrest in South Africa triggered by the arrest of former President Jacob Zuma in July turned to food as people looted grocery stores and restaurants. Shortages in Cuba led to the biggest protests in decades.

Adjusted for inflation and annualized, costs are already higher now than for almost anytime in the past six decades, according FAO data. Indeed, it’s now harder to afford food than it was during the 2011 protests in the Middle East that led to the overthrow of leaders in Tunisia, Libya and Egypt, said Alastair Smith, senior teaching fellow in global sustainable development at Warwick University in the U.K.

“Food is more expensive today than it has been for the vast majority of modern recorded history,” he said.

The ground zero for the Arab Spring protests, Tunisia has raw memories when it comes to food and politics. Just a few days after dismissing the government and suspending parliament in July, President Kais Saied urged producers and retailers to slash prices of selected produce.

Red meat prices fell by about 10% almost instantly, with the nation’s main business lobby group Utica announcing unspecified cuts in prices for staples ranging from wheat flour, meat, to dairy, coffee and soft drinks. Fruit prices fell by as much as 20%, Tunisian media reported. Still, consumer prices overall rose at an annual rate of 6.2% in August.

Then there’s the prospect of subsidy cuts. A debate is raging about a long-planned shift to focus spending on the neediest citizens as Tunisia tries to secure a new financing program from the International Monetary Fund. That will likely lead to reduced support for items likes flour and sugar as well as electricity for a substantial number of households.

North African neighbors are also looking at subsidy cuts to help fix public finances. In Egypt, President Abdel-Fattah El-Sisi called for a rise in bread prices. Algerian bakers have already hiked prices of subsidized bread in an act of defiance amid a shortage of wheat or shrunk the size of loaves. In Morocco, authorities announced in July a plan that will see cuts to subsidies on sugar and low-cost wheat flour starting next year, subject to the approval of parliament. 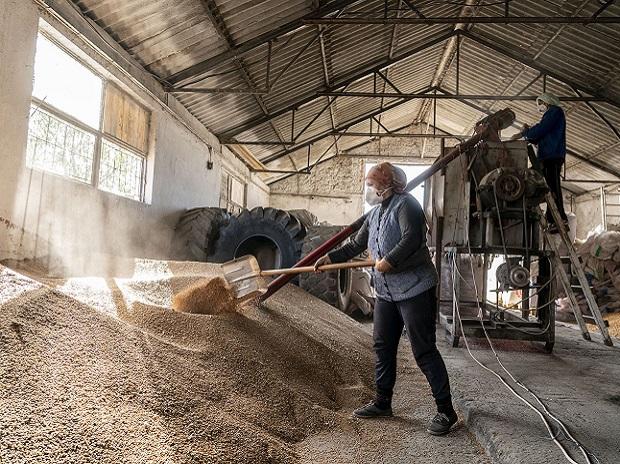 An agricultural worker shovels grain in a storage barn on a farm near the Danube Black Sea Canal in Agigea, Romania. Photographer: Evgeniy Maloletka/Bloomberg

The cost of bread is not just political for grain-importing countries in North Africa and the Middle East. Romania is Europe’s top exporter this season, and yet prices have soared at a double-digit pace. Overall inflation is set to be the fastest in eight years in 2021.

The former eastern bloc country also has a dark history when it comes to feeding its population. Severe shortages were a hallmark of communist dictator Nicolae Ceausescu before he was overthrown and executed in 1989.

Prime Minister Florin Citu’s government wants to cut dependence on imported processed food products as a way to reduce costs and narrow the trade deficit. He is already under pressure after the collapse of his coalition and faced a backlash over his answer to a question about the cost of a loaf of bread. “I don’t eat bread,” he answered.

Romania earmarked 760 million euros ($896 million) for investment in farm storage and processing, Agriculture Minister Adrian Oros said. “We’re one of the biggest exporters of cereals and yet we import frozen bread products,” he said. As of this month, the government is waiting for farmers to submit eligible projects to tap the money over the next two years. However, while Romania’s agricultural potential is one of the biggest in Europe, it so far failed to use EU money to improve its local production. 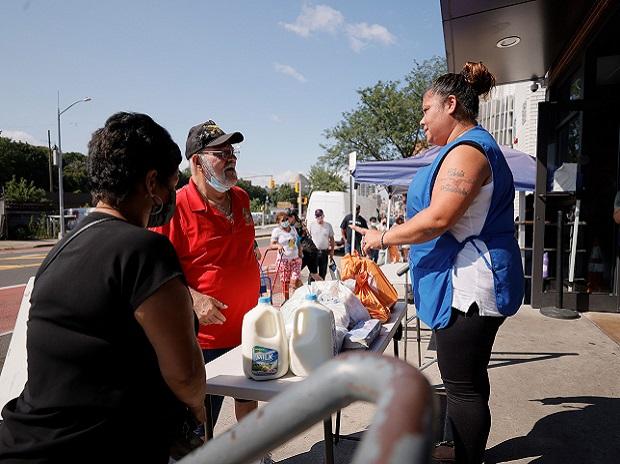 People line up for food at a food bank in New York on July 30. Photographer: Michael Loccisano/Getty Images

Rich countries are having their headaches too as the pandemic hits incomes. In the U.S., the world’s biggest economy, 8.6% of people said they sometimes or often didn’t have enough to eat during the prior week in a survey completed on Aug. 30.

In a reversal from the Donald Trump administration, President Joe Biden is increasing government assistance to low- and middle-income Americans with the biggest long-term rise in food stamp benefits in the program’s history.

The increased dispersal of stamps to buy groceries adds to temporary pandemic measures such as child tax credits and broadened access to school meal programs. Critics have said the government subsidy is inadequate though.

The government in Washington has been showing concern about rising consumer prices as the economy rebounds from Covid-19. It’s taking aim at major meatpackers, charging that “pandemic profiteering” is squeezing consumers and farmers alike.

The country has also implemented trade measures to shield consumers from spikes in global prices. The government has cut duties on palm, soybean and sunflower oils as well as lentils. India isn’t the only nation to use trade to intervene in the food market. War-torn Syria has tightened imports of items ranging from cheese to cashew nuts to safeguard its dwindling foreign currency reserves for wheat purchases. Argentina and Bolivia have curbed exports of beef to keep prices at home in check, as has drought-hit Kazakhstan, which forbade exports of oat, rye and forage and added quotas for forage wheat. 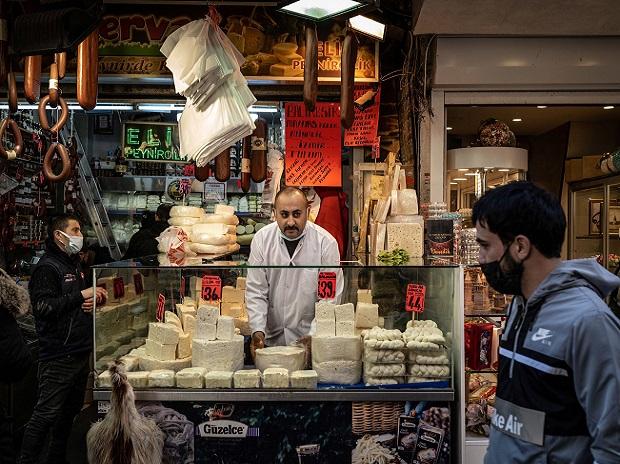 In Turkey, President Recep Tayyip Erdogan’s popularity has slumped because of the economy and cost of living. Food inflation accelerated for a fourth month in August, to 29%.

The government is making another attempt to control prices through threats of fines for businesses selling at elevated prices to an investigation into higher costs. Trade ministry officials are ordered to inspect allegations of excessive price increases in food products at wholesale markets in major Turkish cities, including Istanbul, Ankara and Izmir.

Erdogan’s government is also working on some legislative changes to curb food inflation. From October, fresh fruit and vegetables that may have been wasted on farms will be brought to an online market, and an early weather warning system will be put in place to spot potential supply shocks. There’s also the prospect of tax incentives and more trade measures. Turkey removed import duties on grains and lentils on Sept. 8. 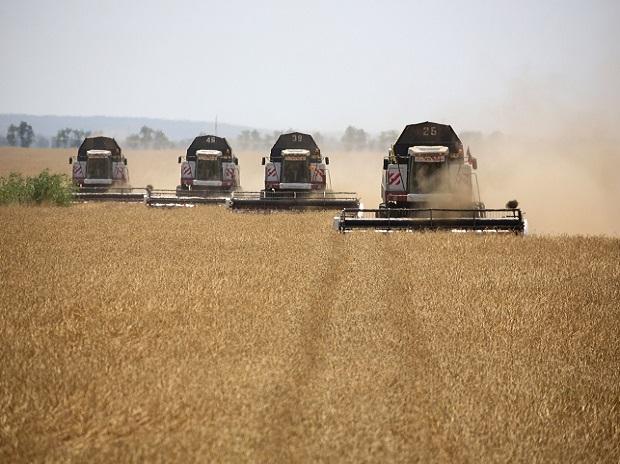 Combine harvesters drive through a wheat field during the summer harvest on a farm in Tersky village, near Stavropol, Russia. Photographer: Andrey Rudakov/Bloomberg

The world’s top grains exporter shows the limitation of adjusting trade rules to curb prices. Russia introduced a wheat export tax in February, but it’s also paying with a loss of market share. The nation’s wheat is no longer as competitive, derailing exports to Egypt, one of its biggest customers.

At home, the measures haven’t helped curb food inflation, either. It’s hovering at a five-year high. Domestic wheat prices jumped in August to levels typically not seen this time of year as farmers and traders were reluctant to sell.