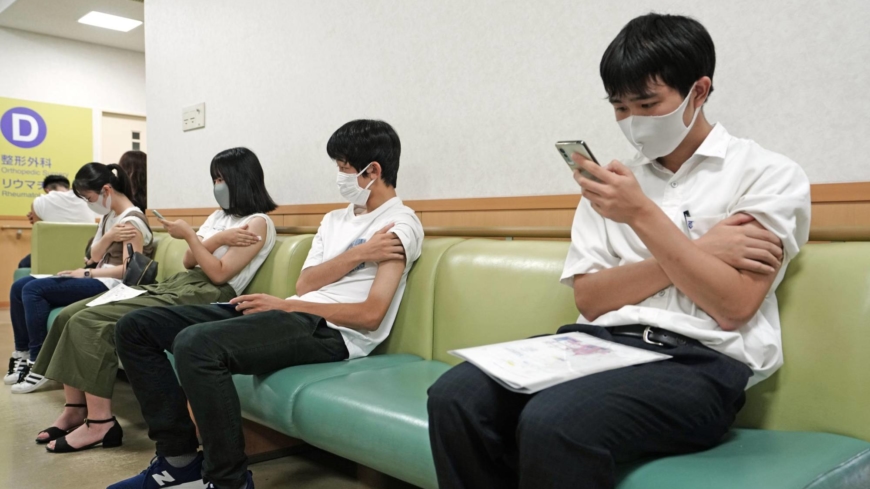 A delta-driven surge in COVID-19 cases is coming to a faster-than-expected end in Japan, but experts warn another wave of infections may be just around the corner.

The country’s fifth wave was the most explosive yet and wreaked havoc on the nation’s health care system.

But the surge has subsided significantly since its mid-August peak. Health ministry data shows there were 2,661 new cases confirmed nationwide on Saturday, a dramatic drop from the middle of last month when the daily tally routinely topped 20,000 and peaked over 25,000.

Health minister Norihisa Tamura said on a Sunday TV program that he thinks it will be possible to lift the state of emergency imposed on 19 prefectures on Oct. 1, although he continued to call on people to avoid activities that put them at high risk of catching the virus.

The fall in infections can be attributed to a variety of factors, the most prominent of which is the steadfast increase in vaccine uptake, said Koji Wada, a professor of public health at the International University of Health and Welfare in Tokyo.

Despite a slow start, Japan’s vaccine rollout has progressed rapidly over the past few months. The share of people who have received at least one shot of the vaccine has reached 68%, surpassing Germany’s rate of 67% and that of the United States at 63%, according to the latest data compiled by Our World in Data.

A health ministry advisory panel pointed to other contributing factors, too. Many people, it said, were likely discouraged from going out due to a lengthy period of rainy weather in Tokyo and other parts of the country last month. Others may have been scared enough to change their behavior amid a barrage of grim COVID-19 stories in the news and the dire situation facing front-line health care workers.

“There are likely to be multiple factors at play, but given the resistant nature of the delta variant, the pace at which infections are decreasing is remarkable,” Wada said.

But the panel warned that a sixth wave may still be imminent. While vaccination rates will continue to rise, national holidays and school reopenings earlier this month may yet lead to a resurgence “even before the number of cases decreases back to a sufficiently low level,” the panel said during its most recent session on Sept. 16.

“If people think they’re now out of the woods and start getting complacent, it may be just a month or two before we see another huge wave,” Kasanuki said.

The need for vigilance was echoed by Tokyo Gov. Yuriko Koike, who told reporters on Friday that despite dwindling daily cases, there is nothing optimistic to report when it comes to hospitalizations and the number of severely ill patients.

The number of hospitalized COVID-19 patients in Tokyo, for example, was 2,046 as of Wednesday, which Koike said remained significantly higher than in March, when the nation was thought to be safely past a third wave that had flared up in early January and the number reached a low of 1,250.

Likewise, the number of severely ill patients in Tokyo totaled 146 on Wednesday, nearly the same as the 160 recorded in the throes of the third wave in January, the governor said.

“Needless to say, we’re still in the middle of the state of emergency. In order to curb new positive cases, we must not let our guard down and need to rein in the flow of people and minimize contact,” Koike said. “In other words, we need to hang tough a little longer.”

Kasanuki added that there is expected to be a spike in long-distance trips by people visiting their hometowns for New Year’s, which the professor cited as another possible trigger for a major surge in infections.

“What I think we’re going to see for a while is this pattern of cases ebbing and then rising again — so in the long run, I’d say it’s going to be another two or three years before the pandemic fully ends.”

Tesla looks to pave the way for Chinese battery makers to come to U.S.