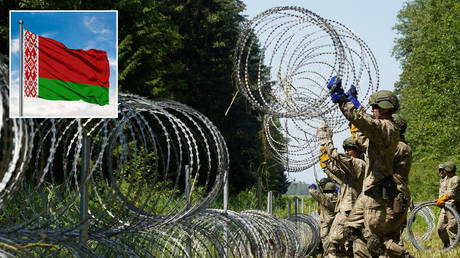 The leaders of Poland, Lithuania and Latvia are lying when they declare publicly that Belarus is flying in illegal immigrants as a means to wage a “hybrid war” against the EU, the country’s foreign minister claimed on Monday.

In the last few months, a migrant crisis on the Belarusian border has led its northern and western neighbors to build barbed-wire fences and boost patrols on the frontier.

The authorities in Warsaw, Vilnius and Riga have accused Belarus of conducting “warfare” by flying migrants from Middle Eastern countries like Syria and Iraq to Minsk and shuttling them to the country’s border promising them a better life in the European Union. This comes after Belarusian President Alexander Lukashenko said his government would no longer make any effort to stop illegal immigration.

Also on rt.com EU countries bordering Belarus given handout by Brussels to deal with flood of refugees fleeing through Eastern European nation

According to Foreign Minister Vladimir Makei, this is a complete lie. Speaking at the UN General Assembly in New York on Monday, the foreign minister said that the average citizen realizes that Belarus, with just 10 million people, is “objectively unable” to wage any type of war with the 500 million-strong European Union, “even if it had the muscles of Arnold Schwarzenegger.” 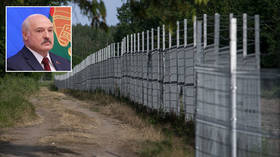 “Since April of this year, we have proposed to the EU to hold consultations on the issue of illegal migration, but there has been no reaction,” he told the UN. “In violation of earlier agreements, the EU has stopped financing all projects related to the fight against illegal migration.”

“If an offer of dialogue is met with the construction of an iron curtain of barbed wire, then all the blame lies with those builders,” he said.

Makei also pointed the blame at an EU he believes is directly responsible for the worldwide “hunger and disasters” that cause people to flee their home countries and head toward Europe.

Earlier this month, Poland declared a state of emergency due to the rising number of asylum seekers, claiming that border guards detained eight times as many people in August as they did in the whole of 2020. There have also been reports of deaths at the Polish-Belarusian frontier.

Warsaw has admitted that it is turning the migrants around and sending them back to Belarus, which has been denounced as “completely unacceptable” by European Home Affairs Commissioner Ylva Johansson.

“We must help Poland to protect its borders, but it is also important to prevent people losing their lives at these borders, and these are issues we must discuss,” Johansson said.