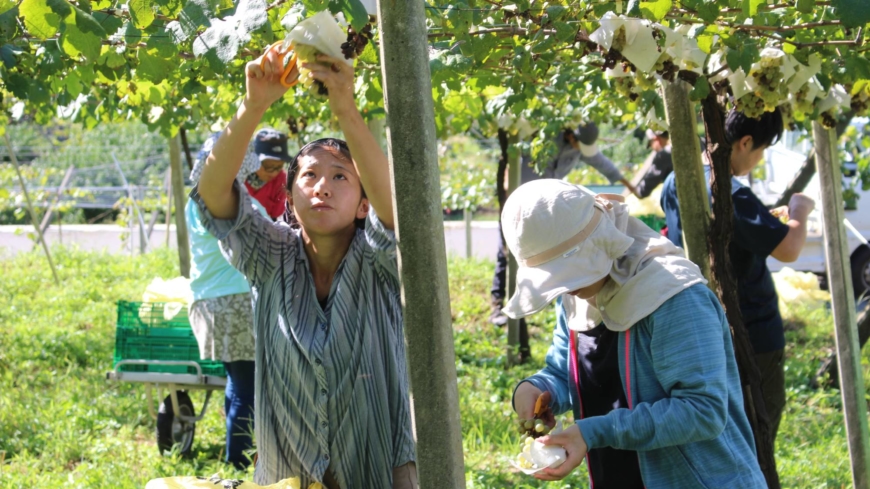 Yamanashi – It’s the dawn after Typhoon Chanthu drenched Koki Oyamada’s vineyards, and the aspiring vintners who have come to train at Domaine Oyamada are already bathed in sweat, slapping at mosquitoes as they pick bunches of petit manseng grapes in the oppressive heat.

They have gathered from around the country to study under one of the pioneers of a Japanese wine transformation that is beginning to command serious global attention — successfully shedding the persistent reputation that the country offered little more than cloying tipples fit for convenience store shelves or ryokan gift shops.

With just over 350 wineries (and growing), Japan is unlikely ever to compete on scale with major wine producing countries such as France or Australia, where appropriate terrain is simply more plentiful. Battling heat, humidity and wet summers, Japan’s producers have set their sights on carving out a niche in distinctive, well-crafted wines, instead.

Despite these challenges, followers of Japan’s wine scene say momentum is on its side. Considering the country’s wine efflorescence began in the early 2000s — and it takes new vines roughly 15 years to express their potential — it’s possible this surprising wine narrative is just beginning.

“We’re still in the very early stages of seeing some of the best wines from Japan,” says Julian Stevens, a former taster at prestigious British wine merchant Berry Bros. & Rudd in both London and Tokyo. “I think it’s a really exciting time.”

Some of the reasons for Japan’s wine transformation become clear during a backbreaking morning participating in Oyamada’s harvest.

First, the quality European grape varieties planted at Domaine Oyamada are noteworthy even for wine connoisseurs — next to rows of petit manseng, Oyamada has planted similarly obscure grapes such as mourvedre and tannat. Until 2000, it was rare for Japanese wineries to grow even familiar wine grapes such as merlot and chardonnay. Instead, they made wine from Japanese table grapes and cheap imported fruit or concentrated must — accounting for the notorious sickly sweetness.

Next, there’s perfectionism in the cultivation. Since the beginning of summer, Oyamada and his trainees have covered every bunch in the vineyard with paper umbrellas to protect them from the seasonal tsuyu rains — and typhoons, which sweep across the country throughout fall and can damage crops just as they are due to be harvested.

After clipping a bunch, the vintners must examine it carefully for spoiled grapes, plucking them out one by one. The inspection is done not only by looking, but by sniffing — rotten grapes often hide within a healthy cluster, detected only by a sour smell.

One of the most painstaking aspects of Oyamada’s cultivation style is mixed planting. In a single vineyard, he grows different grape varieties side-by-side — more laborious than planting each field with one variety. Doing so, he says, creates an environment that enables him to grow grapes in the most natural way possible, with minimal organic pesticides (he never uses chemical ones).

A similar perfectionist spirit caught the world’s eye more than a generation ago — in the culinary world — when a wave of young Japanese chefs went abroad to train in the great kitchens of France and Italy, and returned with world-class skills that helped turn Tokyo into a gastronomic mecca.

There are parallels with Japanese winemaking today. To succeed, many vintners trained at prestigious domaines in France and Italy, or studied at the best French winemaking institutions. Oyamada’s fellow pioneers established the nation’s first “domaines” — where wine is made from grapes grown only on the vintner’s own land. One of Oyamada’s contemporaries, Eishi Okamoto, was described by a noted Tokyo chef as handling grapes “as if they were diamonds or pearls.”

Like their culinary counterparts, these vintners came home armed not only with knowledge, but a desire to create something unique, seeing little point in crafting a second-best burgundy or barolo. It’s one reason why the global wine class is starting to pay keen attention to Japan.

“Japanese vintners today are in pursuit of a distinctive appeal,” says sommelier Yuji Inui, pouring a selection of Nagano wines at Kamoshiya, the Japanese wine bar he runs in Matsumoto, Nagano Prefecture. “They seek a quality differentiated from European wines.”

The tendency of these new winemakers to apply near-obsessive dedication to mastering what Oyamada calls “the farmer’s art” is partly behind a surprising twist in the narrative of Japan’s wine transformation. If, two decades ago, ambitious mavericks traveled to France to learn from the masters, today one of France’s most prestigious wineries has come to Japan to make wine.

Domaine de Montille, which Berry Bros. & Rudd calls “one of the purest expressions of pinot noir to be found in Burgundy today,” dates back to 1730. Two years ago, Etienne de Montille — ninth heir to the family estate — acquired a plot of land in Hokkaido and planted the first saplings of a new vineyard, calling it the “de Montille & Hokkaido Project.”

De Montille says climate change and “the potential of Hokkaido terroirs to express the best of pinot noir and chardonnay” were fundamental to his decision, along with the knowledge he could count on outstanding local talent to help turn his project into reality.

“From the beginning, I conceived this project as a cooperation between France and Japan, so quality is important,” de Montille says. “Winemaking in Japan has evolved greatly in the past 10 years. I am convinced that quality and authenticity represent the future of Japanese wine.”

Pioneers such as Oyamada learned winemaking from a figure considered the godfather of Japan’s wine transformation. In the 1980s, Usuke Arai waged a lonely battle to prove that Japan could make fine wines — and succeeded with a Nagano merlot that’s the stuff of legend. He went on to mentor a generation of winemakers.

Today, Oyamada drives a new wave of mentoring that’s unleashing unprecedented energy in Japanese wine. Young winemakers now have opportunities to learn from masters at home. And unlike traditional Japanese “master-apprentice” frameworks, there’s a free and open feel. Prominent figures in the movement include Toyoo Tamamura of Villa D’Est winery in Nagano, and an American, Bruce Gutlove, of 10R winery in Hokkaido. Gutlove calls his operation “an incubator” of talent.

“The influence of these figures in launching a new generation of winemakers cannot be overstated,” Japan Vineyard Association Representative Director Miyuki Katori says at Buan, a Japanese wine bar in Tokyo where young people gather to talk about wine.

De Montille, too, is part of the movement. “We want to share Burgundy winemaking knowledge and experience,” he says. “Whenever we bring in a wine expert from France, we always organize seminars for Japanese winemakers.”

“My wish is that they go on to create wines that we veterans never imagined,” he says. “My generation broke through an old system, an old way of making wines. This new generation isn’t tied to any of that. They are free.”

For more information, visit bit.ly/domaineoyamada. Over the next several months, New Wine Frontier will explore the evolving world of Japanese wine through profiles of the country’s most exciting vintners.

In line with COVID-19 guidelines, the government is strongly requesting that residents and visitors exercise caution if they choose to visit bars, restaurants, music venues and other public spaces.