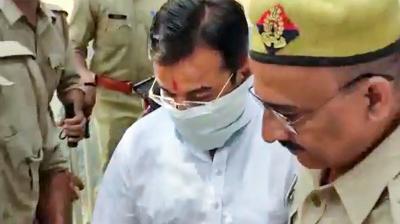 New Delhi: Ashish Mishra, the son of Union minister of state for home Ajay Mishra, accused of running over and killing farmers at Lakhimpur Kheri, was arrested by the district police late on Saturday after being questioned by the Special Investigation Team (SIT) of crime branch. Though the police authorities were yet to make an official announcement about the arrest, sources said that he was expected to be produced in the court late on Saturday night.

Sources also claimed that following his interrogation, the SIT recommended to the district police to add some more sections of IPC in the FIR lodged against Ashish Mishra as they were not convinced with his version of the violent incident that has rocked the entire nation last Sunday.

As Ashish Mishra’s interrogation continued till late Saturday evening by the six-member SIT, headed by DIG Upendra Agarwal, in the Lakhimpur crime branch office, he reportedly provided videos and affidavits of 10 persons to the police authorities to prove that he was not inside the vehicle that had ploughed into the group of protesting farmers in Lakhimpur Kheri last week.

Ashish Mishra had on Friday skipped summons that asked him to appear for questioning before the SIT in connection with the Lakhimpur Kheri violence on October 3. Ashish, the main accused in the case, appeared before the SIT on Saturday, before 11 am, the time mentioned in the second summons served to him after he did not turn up.

Earlier on Saturday, Samyukt Kisan Morcha (SKM) — an umbrella body of farmers protesting against the contentious farm laws — called for ‘rail roko’ on October 18 and a mahapanchayat in Lucknow on October 26 to protest Lakhimpur Kheri violence and demand the arrest of Union minister Ajay Mishra and his son Ashish. “Union Minister Ajay Mishra should be removed and arrested as he started this conspiracy,” SKM leader Yogendra Yadav said, adding that they will burn effigies of Prime Minister Narendra Modi and Union home minister Amit Shah on Dusshera on October 15.

Meanwhile, amid demands by the Opposition to arrest the Union minister’s son, Uttar Pradesh chief minister Yogi Adityanath said there will be no injustice with anyone and no action will be taken under any kind of pressure or without evidence. This comes a day after the Supreme Court, while hearing a PIL over the matter, said that it was not satisfied with the steps taken by the UP government to address the issue.

Congress general secretary Priyanka Gandhi Vadra will lead a “Kisan Nyay” rally in Varanasi on Sunday demanding the immediate arrest of the accused and repeal of the three farm laws.

Shiv Sena Rajya Sabha MP Sanjay Raut too said his party will participate with full force in the October 11 bandh in Maharashtra to protest against the killing of farmers in Uttar Pradesh’s Lakhimpur Kheri. Addressing a press conference along with NCP spokesperson Nawab Malik and state Congress spokesperson Sachin Sawant, Mr Raut said it was necessary to wake people up against the anti-farmer policies of the Central government.

“Prime Minister Narendra Modi should for once express grief in Parliament over the death of around 750 farmers during the months-long anti-farm law protests on Delhi’s borders,” Bhartiya Kisan Union (BKU) leader Rakesh Tikait said. He slammed the BJP-led Centre over the minimum support price (MSP) issue, and alleged that the government’s assurance that the system would continue is “only on paper” and the farmers want it in reality.

Further attacking the Uttar Pradesh government over its handling of the probe in the Lakhimpur Kheri incident, Samajwadi Party chief Akhilesh Yadav alleged it was giving “bouquet” to culprits instead of bringing them to book.

Punjab Congress chief Navjot Singh Sidhu ended his hunger strike on Saturday. Mr Sidhu had started fasting on Friday at the Lakhimpur residence of late journalist Raman Kashyap, who was among the eight people killed in the October 3 violence, and vowed to continue until Ashish reports to the police or is arrested.

Eight people died after an SUV — Mahindra Thar — owned by Ajay Mishra rammed into a group of farmers holding a peaceful protest as part of the national agitation against the Centre’s farm laws. The farmers have alleged Ashish Mishra was in the SUV. Both Ashish and his father have denied the charge.