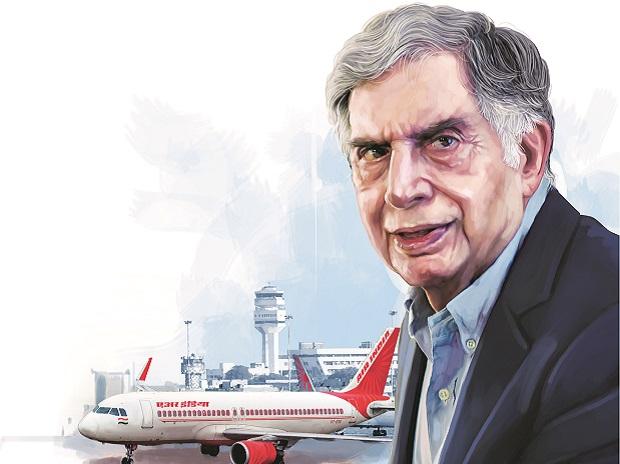 Tata Sons’ enterprise value bid of Rs 18,000 crore with a cash component of Rs 2,700 crore was higher than the offer from a consortium led by SpiceJet Chairman Ajay Singh.

The acquisition gives the Tatas 141 planes and 900 slots at overseas airports, the most valuable of which are at London’s Heathrow airport.

While this is the end of a long wait for the Tatas, it also marks the start of Narendra Modi’s challenging privatisation drive seven years after he first took office. The United Progressive Alliance government led by Manmohan Singh had not done any privatisation in its 10-year rule. Modi is looking to carry on the legacy of Atal Bihari Vajpayee, who has a formidable track record of selling several state-run companies between 1999 and 2004.

Before we dive into PM Modi’s plans, let us first see how public-sector enterprises privatised by the Vajpayee government have fared.

The NDA government under Vajpayee managed to sell as many as 12 PSUs, despite strong opposition from within the government and the bureaucracy. A separate Ministry of Disinvestment under Arun Shourie had gone ahead with privatisation in the face of opposition from the Bharatiya Janata Party’s ideological parent Rashtriya Swayamsevak Sangh, or the RSS, and its various wings. These PSUs were:

These companies have performed significantly well since moving into private hands. Iconic bread manufacturer Modern Foods was the first company to be privatised and it was sold to Hindustan Unilever in 2000. In April 2016, the FMCG company changed hands again when Everstone Capital acquired it from Hindustan Unilever. And in February this year, it was again sold to the world’s largest baking company, Mexico’s Grupo Bimbo. It has a 35% share of India’s bread market and a revenue of Rs 400 crore.

Among the big names, Hindustan Zinc was sold to Anil Agarwal’s Vedanta. Since its sale in 2002, Hindustan Zinc has increased its annual profits from just Rs 69 crore to Rs 8,000 crore in FY21. The central government still holds a 29.5% stake in Hindustan Zinc which is now worth Rs 40,000 crore.

Maruti Udyog, which was renamed Maruti Suzuki India after its sale to Japan’s Suzuki Motor Corporation, today is India’s biggest carmaker, with a 50% share of the market.

Videsh Sanchar Nigam Limited, which was sold to the Tata group and later renamed Tata Communications, has more than doubled its annual revenue to Rs 17,000 crore since its privatisation.

Hardware maintenance company CMC was also purchased by Tata Sons in 2001 and was merged with India’s largest software services company TCS in 2015.

For its 52.98% stake in Bharat Petroleum, worth Rs 49,000 crore, the government has contenders in mining conglomerate Vedanta and global funds Apollo and I Squared Capital. They have been given access to the data room until November 15 for due diligence. But there could still be more delays in closing the deal as the valuation will depend not just on the share performance but also on the premium that the government is willing to accept, as the winning bidder will get control of the company.

Another company that’s high on the government’s agenda is India’s largest shipping company. The plan is to sell its entire 64% stake in Shipping Corporation of India, besides privatisation of Container Corporation by divesting 30.8% of the 54.8% stake to a private company and transfer management control to a strategic investor.

The government also wants to reduce the number of public-sector banks in the country through sale to the private sector. However, weak financial performance and low valuations are seen as hurdles in selling public-sector banks. The government also needs to amend banking laws to enable privatisation of these banks. It also faces resistance from the All-India Bank Employees’ Association, which has cited concerns over job security.

The government’s move to sell Vizag Steel Plant has been met with opposition in Andhra Pradesh, with employees staging frequent protests. But if the Air India deal is anything to go by, the employees may get some protection after the sale. The Centre has mandated Tata Sons to retain all Air India employees for one year and if any of them is laid off after this period, the company must offer them a voluntary retirement scheme (VRS).

The Air India deal has signalled that the government is willing to offer better terms to bidders in order to give a fillip to its privatisation plan. To make the prospect of owning Air India more palatable to the new owners, the government took the bulk of the airline’s debt, to the extent of Rs 46,000 crore.

The sale may be the first of many to come over the next few years. To shore up revenue, it has previously resorted to selling its stakes to other PSUs.

Some examples include, Hindustan Petroleum’s sale to ONGC and Power Finance Corporation’s acquisition of Rural Electrification Corporation. Last year, NTPC acquired the government’s stakes in hydropower company THDC and North Eastern Electric Power Corporation. But with a steep goal to achieve, the government must find private buyers to achieve its targets. And now it has shown a greater intent to do so. Will the Air India stake sale set a template for more such deals? Let’s wait and watch.

What should investors do with HDFC Bank post Q2 results: Buy, sell or hold?

Updates: Deaths Due To Kerala Rain Climb To 23 As Search Ops Continue

The Moneyist: ‘I’m getting compassion fatigue’: My parents said they’d rather quit their jobs and lose everything than get the COVID-19 vaccine