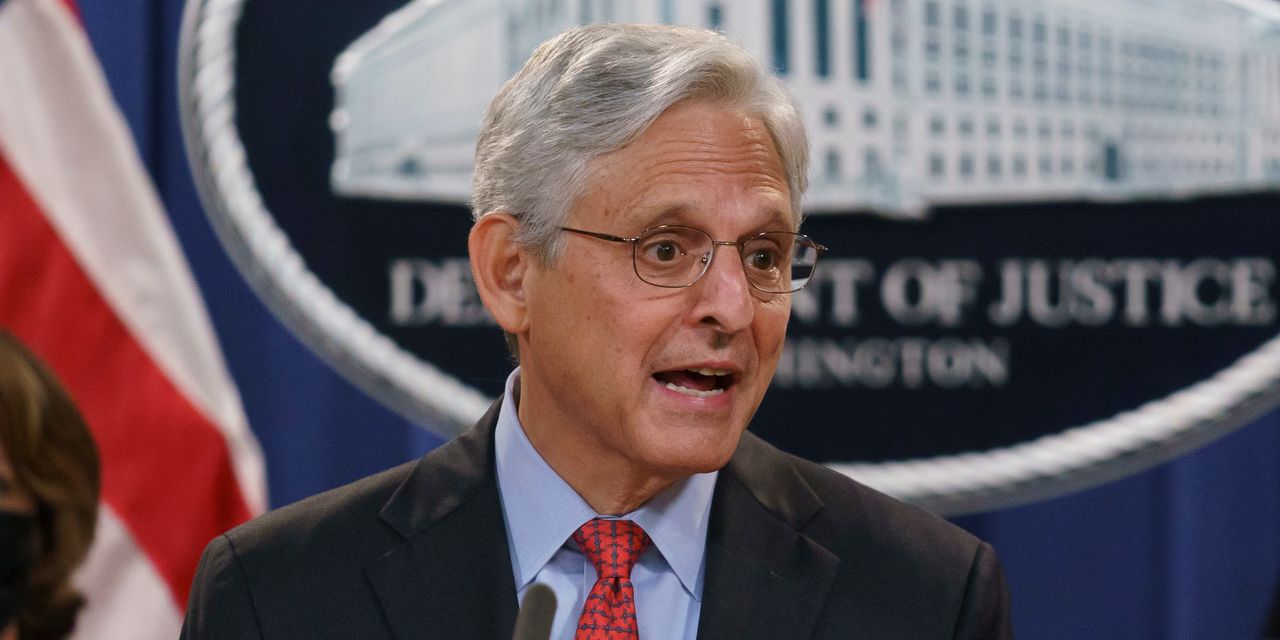 The attorney general is compiling a steadily lengthening register of “society offenders who might well be underground and who never would be missed,” as Ko-Ko, the hypervigilant lord high executioner, sings in Gilbert and Sullivan’s “The Mikado.”

Mr. Garland’s list of society offenders is compendious. At the top are right-wing extremists who’ve been officially designated the greatest domestic threat to U.S. security, but whose ranks seem, in the eyes of the nation’s top lawyer, to include some less obviously malevolent characters, including perhaps anyone who protested the results of the 2020 election. Then there are police departments not compliant with Biden administration law-enforcement dicta, Republican-run states seeking to regularize their voting laws after last year’s pandemic-palooza of an electoral process, and state legislatures that pass strict pro-life legislation.

They’d none of them be missed.

Oddly, the list doesn’t seem to extend to the hundreds of thousands of people who have crossed the southern border so far this year and are now presumably at large somewhere in the U.S. without a legal right to be in the country. Nor to those benevolent folk who have reduced several of the nation’s urban centers to crime-infested wastelands.

But, let’s be fair. With limited resources, Justice has to prioritize. Mr. Garland and his federal henchmen must ensure that only the gravest threats to the republic are neutralized.

Which is presumably why the latest names on his roll are those parents who have had the temerity to challenge local school boards about the mandates they are imposing on their pandemic-ready classes and what the children are learning.

That wasn’t how the attorney general presented it when he announced the news. Citing a “disturbing trend” in harassment, intimidation and threats of violence against school-board members, teachers and other school employees, he declared that he was directing the Federal Bureau of Investigation to work with local and state law enforcement to develop “strategies” for dealing with the problem.

The announcement looked as though it had been carefully coordinated with the National School Boards Association (NSBA), which had asked the Biden administration to do exactly this.

But the letter from the NSBA contained barely any evidence of actual violence. It cited mostly antisocial behavior and threats, and some of the offenses referenced—such as a parent making a mock Nazi salute to a school board—are, however offensive, constitutionally protected speech.

And, as has been widely noted, when acts of violence occur, they can and have been dealt with by local or state law enforcement. There is no federal interest in any of these infractions.

All this merely underscores what the real objective of the attorney general’s action was—and we don’t need to engage in speculation because it was recently spelled out to us by another leading member of President Biden’s party, Terry McAuliffe, the Democratic candidate for governor of Virginia.

In a rare moment of honesty from a politician, Mr. McAuliffe made clear, in a television debate with Republican Glenn Youngkin, the Democrats’ conception of the role that parents should have in their children’s education: none whatever.

“I don’t think parents should be telling schools what they should teach.”

Aside from the jaw-dropping disdain for families, Mr. McAuliffe’s prescription is at odds with Article 26.3 of the United Nations’ Universal Declaration of Human Rights, the sort of grand multilateral pronouncement the Democrats usually fetishize, which states: “Parents have a prior right to choose the kind of education that shall be given to their children.”

This flagrant attempt to intimidate parents into handing their children over to the mercies of the state is as sinister as anything the modern progressives who now control the Democratic Party have done.

The message is clear, and it has been the character of education in totalitarianism systems through history: These are not your children; they are wards of the state, and the state (in this case through the teachers unions that fund the Democratic Party) will determine what they learn and how.

Democrats like Mr. McAuliffe insist that pernicious racial doctrines teaching the ubiquity of white supremacism and the inherent racism of American society and encourage racial segregation aren’t actually taught in schools. But this is laughable. The same Democrats have spent the last year insisting on racial “equity” as the defining objective of their social program. Why would they leave it out of the schools they mostly control?

Mr. Garland’s brazen attempt to intimidate will likely backfire as more parents—including many who aren’t especially conservative—become alarmed by what they see and hear in their children’s schools. By placing them on his little list, he may have done us all a favor.

Dodging the Constitution for a Global Tax