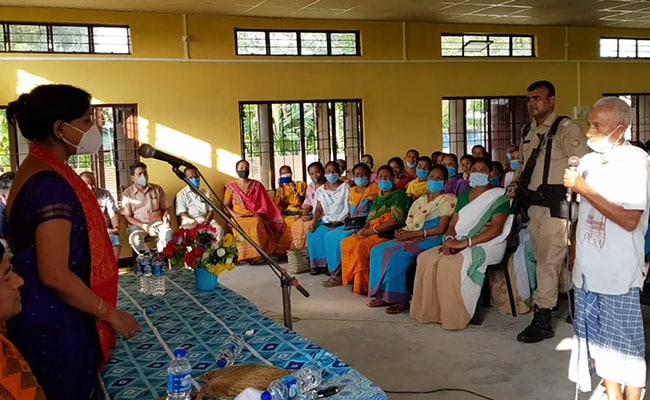 Rural health workers in Assam’s Kokrajhar district, braving forests, streams and bad roads to reach Lungsung forest near the Bhutan border. In this tribal community here, which hasn’t reported a single COVID-19 case, rumours about the vaccine have triggered a reluctance to take the shot. So a medical team led by senior district officers had to work hard to debunk myths and convince them that vaccination vaccine is a must. Among the first to be persuaded to get vaccinated was Karun Toppo, 48.

“Here we have heard a lot of rumours and few of our folks who have smartphone also shown videos of health hazards due to the vaccines. We have heard rumours like it is bad for pregnant women, men will become infertile, thus we were hesitant but now I am convinced that I have to take the jab,” Karun Toppo told NDTV.

His neighbour, Menna Ekka, said everyone was terrified since there was a strong buzz about pregnancy issues due to vaccines. “People thought they will die within five years and in fact people had no idea of what the vaccine is all about,” Menna Ekka said.

For these rural vaccinators, it’s almost a daily routine these days to reach out to inaccessible remote area so that the last mile is covered and the last people are vaccinated, but the biggest challenge for them is to break vaccine hesitancy.

“See, we have to get the task done. It’s our duty and wherever we will be tasked to vaccinate we will reach out, we will carry this mission forward,” said rural vaccinator Pratima Basumatary.

In August, 100 per cent double vaccination in Kokrajhar with 5.5 per cent beneficiaries seemed a daunting task. Only 53 per cent people had got the first dose and 10 per cent the second. Around 50,000 people were identified as “vaccine hesitant” and the district authorities, led by deputy commissioner Varnali Deka, had to make a mammoth effort to win them over.

“About 50,000 were not vaccine hesitant, they were simply resistant, so in many cases we had to take the help of religious leaders, student organisations and community leaders. They were taken on board since for Covid even if you have covered 99 per cent, 1 per cent can topple the board, so we have to cover 100 per cent,” said Kokrajhar deputy commissioner Varnali Deka.

In less than two months, intense door-to-door surveys to identify vaccine hesitant people and a massive outreach to every individual have paid off. Today, 93 per cent people in Kokrajhar have got the first dose and 22 per cent the second dose. Millions of doses in the coming weeks don’t seem a distant dream.

“As a part of our mission, we did about 120 awareness camps in the entire district in over one month and now we have been able to cover 93 per cent of the population with the first dose despite huge hesitancy,” Kokrajhar DPO Jahangir Hussian said.