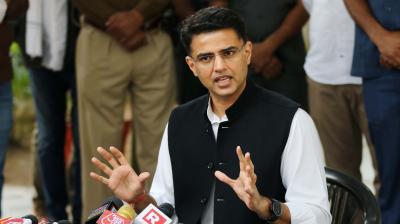 Jaipur: The Rajasthan Cabinet will see the induction of two new women members on Sunday.

Shakuntala Rawat and Zahida are set to take oath as new ministers while Mamta Bhupesh will be taking oath as cabinet minister after elevation to cabinet rank from minister of state, taking the total number of women in the Ashok Gehlot cabinet to three.

Fifteen out of the total 108 Congress MLAs in the House of 200 are women.

“There was indeed a need to increase the participation of women in the cabinet. I am happy that two new faces will be inducted,” Bhupesh told reporters.

Zahida said that it was a good sign that participation of women has increased.

“I am happy that women are being prompted and given opportunities. I will try my best to fulfil the responsibility given to me,” she said.

Fifteen new Rajasthan ministers will take oath at 4 pm on Sunday at the Raj Bhavan here as part of the Cabinet reshuffle, officials said.

The ministers include 11 Cabinet ministers and four ministers of state (MoS).

The new Rajasthan cabinet will see 12 new faces, including five from the Sachin Pilot camp, in the reshuffle.

This is the first cabinet reshuffle of the Gehlot government which came to power in December 2018.

HIV: People with virus or taking PReP to be allowed to join armed forces