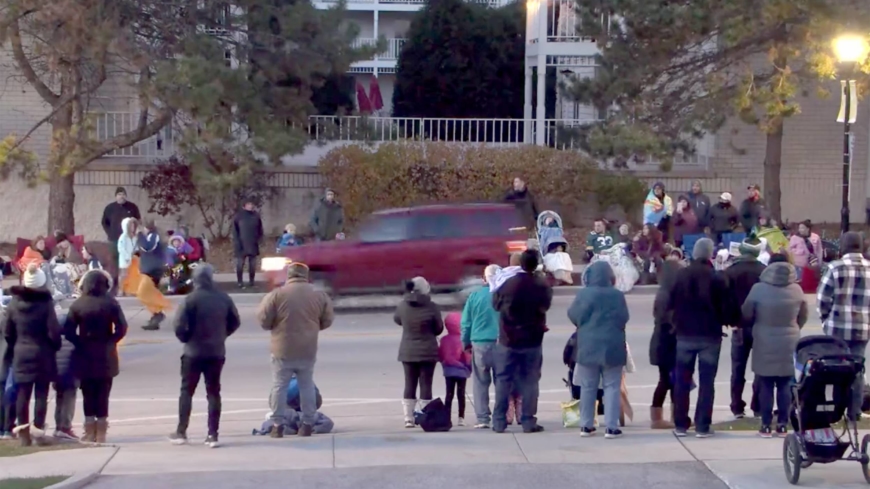 More than 20 people were injured when a red SUV drove through a crowded Christmas parade in Waukesha, Wisconsin, on Sunday, the local police chief said, and at least one person was killed, a local CBS affiliate reporter tweeted.

“A red SUV drove into our Christmas parade that we were holding downtown. More than 20 individuals were injured as a result of this incident,” Thompson told reporters.

Authorities have identified a person of interest in the case, he added, without giving further details.

He said some of the injured were taken to hospital by ambulance, others by police and still more by family and friends.

A video posted online of the incident showed a red SUV plowing through the parade, appearing to run over more than a dozen people.

In a second video, police appeared to open fire on the same vehicle as it crashed through street barriers.

A woman told Fox6 TV station the SUV hit a dance team of girls between 9 and 15 years old. She said the immediate reaction was silence, followed by screaming, running and checking on those injured, Fox6 reported.

Photos and videos of Waukesha circulating on Twitter showed police cars and ambulances crowding a street decked out with Christmas lights in the aftermath of the incident. Bundled up people huddled on sidewalks as dusk fell.

“As we were walking back in between the buildings … we saw an SUV cross over, just put the pedal to the metal and just zooming full speed along the parade route. And then we heard a loud bang, and just deafening cries and screams from people who are struck by the vehicle,” Angelito Tenorio, an alderman in nearby West Allis, told the newspaper.

One witness said the driver hit the “Dancing Grannies” and at least one person flipped over the hood of the SUV, according to WISN-TV, an ABC affiliate.

Another witness estimated the SUV was going about 64 kph when it hit the crowd of people, the TV station said.