Chelsea stayed top of the table with a 3-0 win at Leicester, while Manchester City won by the same scoreline at home to Everton.

Liverpool thrashed Arsenal 4-0 at Anfield and Steven Gerrard’s first game as Aston Villa manager ended with a 2-0 win over Brighton.

Norwich City fought back to beat Southampton 2-1 in Dean Smith’s first game in charge while Eddie Howe’s reign at Newcastle began with a 3-3 draw against Brentford.

Elsewhere, Burnley drew 3-3 with Crystal Palace, Wolves won 1-0 against West Ham and Tottenham came from behind to win 2-1 against Leeds.

Check out my team of the week and then make your own selections towards the bottom of the article. 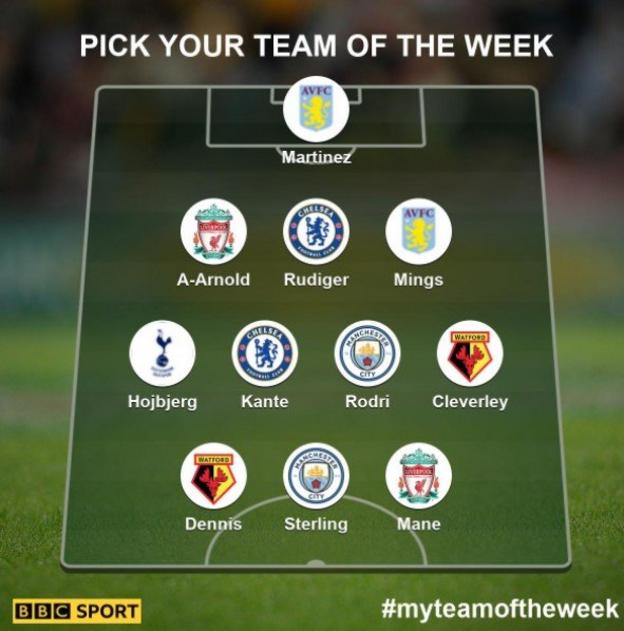 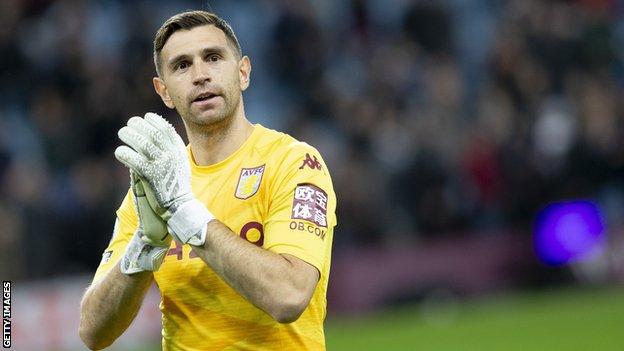 The save by Martinez from Brighton’s Leandro Trossard suggested the Argentine was back in business. The save from Tariq Lamptey’s shot just before half-time was even better.

The keeper was off his line like a shot and quick to deny the full-back any opportunity. I’ve only seen Martinez have one shaky performance this season and that was away to Arsenal, the club who should never have let him go to Villa in the first place.

Martinez was the best keeper the Gunners had at the club at the time – the thing was Arsenal never knew it. Which was rather strange, because everyone else did.

Did you know? Martinez kept his 19th clean sheet in the Premier League for Aston Villa in what was his 49th start in the competition for the club. 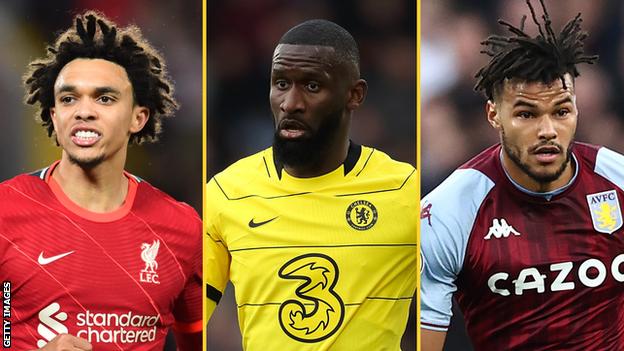 The England player has provided Liverpool with an extra dimension. Any set-piece around the box presents a major issue for the opposition. The quality of ball is so good it provides a problem for the goalkeeper or the defence and, in most cases, both.

Did you know? Since the start of the 2018-19 season, Alexander-Arnold has provided 38 Premier League assists, four more than any other player in this period.

Antonio Rudiger: I seem to recall Antonio Rudiger scoring against Leicester from a set-piece before at the King Power Stadium. You’d have thought the Foxes would have learned their lesson by now.

The German is a threat in the opposition penalty area, and his headed goal was an absolute peach. Chelsea also looked impenetrable at the back with Rudiger and Thiago Silva at the heart of their defence.

Rudiger is without doubt their best defender. Lose him for any length of time for whatever reason and Chelsea might find themselves in a spot of bother.

Tyrone Mings: The arrival of Steven Gerrard at Villa Park seems to have done the trick. It has raised expectations among their fans, restored confidence in the team and seen Tyrone Mings return to the starting line-up after being left out of the side by Dean Smith for the game against West Ham.

I thought at the time, the moment Smith decided to drop the team captain he had a problem in the dressing room. Managers seldom recover from those events. With Mings back in the side and Villa delivering clean sheets again, who can say what the future holds for Villa, Mings or Gerrard?

Did you know? Tyrone Mings ended a run of 40 Premier League appearances without a goal, finding the net for the first time since November 2020 v Southampton. 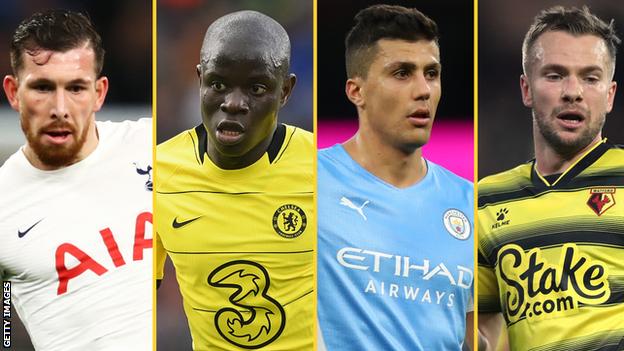 Pierre-Emile Hojbjerg: We were not that long into the game when it was becoming glaringly obvious to me that Spurs were out of their depth against a Leeds side who were far more disciplined and tactically aware.

I don’t for one minute doubt Antonio Conte’s credentials and if you had read the Crooks of Matter recently, you would know why. The issue is Conte has an enormous amount of work to do at Spurs.

However, he could do much worse than start building his team around the likes of Pierre-Emile Hojbjerg. The Denmark international is a serious, no-nonsense individual who appears to have all the characteristics Conte admires. The Italian manager’s passion for the game and will to win is compelling. It will take some time before Spurs can match that and that’s why he needs time.

Did you know? Hojbjerg has now scored as many goals in 50 Premier League appearances for Tottenham as he managed in 109 for Southampton (four). All four of his league goals for Spurs have come at the Tottenham Hotspur Stadium.

N’Golo Kante: He’s very capable of this so I don’t know why he doesn’t do it more often. N’Golo Kante’s 28th-minute strike with his left foot was as clean as it was brilliant.

Kante is back to his best but looking more comfortable on the ball than I’ve ever seen him. Normally you soon find out who the best 11 players are in any given team. The beauty about this Chelsea side is I don’t know what their best team is. Whoever comes in seems to fit the system perfectly and once in, it’s very difficult to get him out. It’s a system that can only be deployed if you’ve got the depth of squad and the quality of players to do it.

Did you know? Only Chris Wood (four) and Emile Heskey (three) have scored more Premier League goals against Leicester as a former player than Chelsea’s Kante (two).

Rodri: The silent assassin wasn’t so silent against Everton. His strike against the Toffees was sensational. Rodri made my team two weeks ago playing a very different role where he was less concerned about scoring goals than stopping the opposition from playing.

The way the ball broke for Rodri made it irresistible for the player to hit it. Well, that’s what he did and the ball flew into the back of the net. Such is the nature of Rodri’s game, he will probably pick up more bookings in a season than goals.

Did you know? Four of Rodri’s eight goals for Manchester City in all competitions have been scored from outside the box. Since the start of the 2019-20 season, only Kevin de Bruyne (nine) and Riyad Mahrez (eight) have netted more for the club from outside the box than Rodri (four).

Tom Cleverley: Few might remember that Tom Cleverley played for Manchester United and won a Premier League title. I wonder what the Watford midfielder thought of this United compared with the side that won the title in 2013. David de Gea was the only remaining survivor in United’s ranks from that title-winning season on display at Vicarage Road and I suspect the conversation between the two after the game might have been rather colourful.

United’s team is full of headliners but Cleverley wasn’t even a star when he was playing regularly at Old Trafford. This is an honest professional who has had a wonderful career and is playing as well as I’ve seen him for some time. He outshone Jadon Sancho, who must be starting to wonder if he made the right move to Manchester United, and Cristiano Ronaldo must wonder whether he went to the right Manchester club. 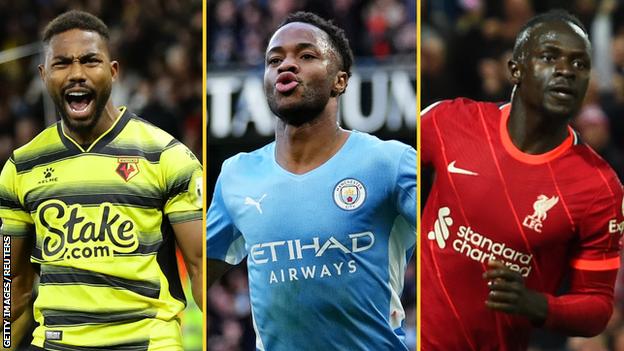 Emmanuel Dennis: “At the moment we are in a very difficult situation,” said De Gea in his post-match interview. “We don’t know what to do with the ball, we don’t know how to defend properly.”

What a terrible indictment of the Manchester United coaching staff. When a player is prepared to come on national TV and be so scathing of his team’s performance, it can only mean one thing and that is the end of the manager. And so it proved. Ole Gunnar Solskjaer’s departure was inevitable.

The arrival of Ronaldo only served to paper over the cracks, while the arrival of Claudio Ranieri might actually save Watford.

Meanwhile, Emmanuel Dennis looks the part and might be as big a star in the Africa Cup of Nations for Nigeria in January as he was against United.

Did you know? Dennis is averaging a goal or assist every 93 minutes in the Premier League this season, the fourth-best ratio of any player with 500-plus minutes played, after Mohamed Salah (every 60), Reece James (every 69) and Paul Pogba (every 90).

Raheem Sterling: He’s not been playing at his best for his club for a while, although he’s done better for his country.

Against Everton, Raheem Sterling looked a little bit like his former self. His goal was instinctively brilliant but Sterling’s game, I feel, has gone backwards from where it was a season ago.

You can’t fault his work rate but in front of goal he doesn’t seem to be as sharp or as clinical. If Sterling can get that back then he really is back in business. It will take a bit of work though.

Did you know? Sterling made his 300th Premier League appearance; aged 26 years and 348 days, he is the fourth-youngest player to reach this milestone in the competition, and youngest since James Milner in April 2012 (26y 117d), who also reached it while playing for Manchester City.

Sadio Mane: So it’s like that then, is it Jurgen Klopp? I wondered what the touchline row was about with Mikel Arteta. It was clear from Klopp’s post-match interview that he thought that Sadio Mane’s challenge on Takehiro Tomiyasu was fair, but boy did he use the ensuing confrontation with Arteta to fuel the Anfield crowd.

Liverpool were struggling until that moment and the only mistake Arteta made was getting involved with Klopp in the first place. The row ignited the crowd and Klopp knew it would. Mane, the architect of the incident with Tomiyasu, also took advantage of Anfield’s rise in temperature with a well-taken goal and a glorious assist. But it was Klopp who was the villain here, not Arteta.

Did you know? Mane has scored eight times against Arsenal during his Premier League career, netting more often only versus Crystal Palace (13).

The Crooks of the Matter

It was December 1978 and the last league fixtures of the calendar year. Manchester United weren’t saying an awful lot but West Bromwich Albion were.

The Baggies were near the top of the table and there was a faint whiff of a league title hovering over The Hawthorns, so a visit to Old Trafford was going to be a real test. The Baggies also had three black players playing for them, which at the time was unique, and another reason I was particularly interested in the fixture.

Little did I know that Brendon Batson, Cyrille Regis and Laurie Cunningham would go on to become iconic football figures, Bryan Robson would in time become United and England’s captain, or that commentator Gerald Sinstadt’s name would be scorched into my memory for forever and a day.

West Brom went on to win the game 5-3, while the match itself was considered a classic. Cunningham and Regis tore United to shreds and Sinstadt was the first person I ever heard call out racist abuse during a football commentary.

Those were the days when commentators told you who the players were, followed by the occasional comment. Now we get an encyclopaedic analysis of every player’s attribute, who he’s married to and the names of all his children.

The recent passing of Sinstadt and the tributes that followed didn’t, in my view, give enough credit for his courageous comments. The game will be remembered for great goals and a famous victory by the Baggies, but for me, it was also Sinstadt’s finest hour.