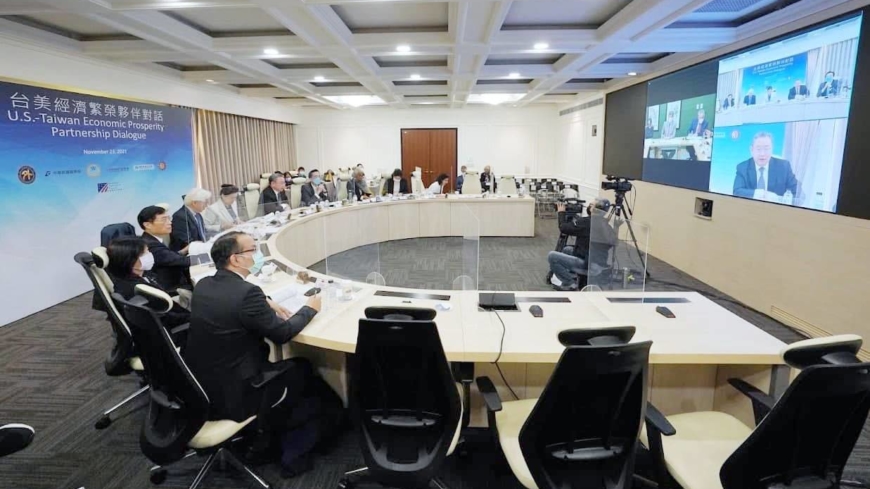 Taipei – Taiwan and the United States held a second meeting of their new annual economic dialogue on Tuesday to forge closer ties as U.S. President Joe Biden’s administration shows support to the self-ruled island that has come under increasing pressure from mainland China.

“The talks are a great way for bilateral cooperation on economic strategies,” Wang said, adding that they agreed to promote supply chain security and cooperate on pharmaceuticals, health, clean energy and semiconductors amid a global chip crunch.

Wang said the two sides discussed the sanctions China imposed on Lithuania after the European country allowed Taiwan to open a representative office under its name in its capital. Wang said the U.S. side supported Lithuania’s move and commended the European Union’s backing of the Baltic state.

The two sides agreed that Taiwan and the United States will hold the first in-person science and technology meeting, anticipated for next year in Taipei. They will also convene the fourth Digital Economy Forum in the middle of next year and establish a business advisory group to recommend ways to enhance economic and commercial ties between the two sides.

Like the inaugural EPPD held in November last year, this year’s meeting took place under the auspices of the American Institute in Taiwan, Washington’s de facto embassy in lieu of formal diplomatic ties with Taipei, and the Taipei Economic and Cultural Representative Office in the United States.

Led by Under Secretary of State for Economic Growth, Energy, and the Environment Jose Fernandez, the U.S. delegation included Rick Waters, deputy assistant secretary of state for China, Taiwan and Mongolia in the Bureau of East Asia and Pacific Affairs.

The Taiwan delegation also included Minister of Science and Technology Wu Tsung-tsong, Taiwan’s representative to the United States Hsiao Bi-khim and officials from foreign and health ministries, as well as the National Development Council.

Trade talks between the two sides under a Trade and Investment Framework Agreement signed in 1994 have hit roadblocks since 2007 due to gaps on such issues as Taiwan’s restriction on imports of U.S. meat containing traces of ractopamine, a leanness-enhancing additive approved for use in livestock in the United States.

After a five-year hiatus, Taiwan and the United States resumed the high-level trade engagement on June 30 after the government of President Tsai Ing-wen, of the Democratic Progressive Party, relaxed the restriction on imports of U.S. beef and pork.

However, the main opposition Nationalist Party (KMT) has initiated a referendum to prohibit the imports, which will be held on Dec. 18.