Production at India’s top two-wheeler makers, Hero MotoCorp and Honda Motorcycle and Scooters India (HMSI), has been estimated to have slumped to its lowest in seven years in October and November.

Sales of motorcycles and scooters failed to gather momentum even during the festive months, leaving the companies saddled with a pile of unsold stocks.

The two firms account for close to 60 per cent of the domestic two-wheeler market and the skidding production volumes reinforce the poor demand and structural slowdown facing the world’s largest two-wheeler market. The companies have stocks for 45-55 days at their channels, according to dealer sources.

In addition to a sharp 25 per cent increase in prices of motorcycles and scooters in the last couple of years, a slowdown in rural sales, coupled with high fuel prices, has been keeping buyers away.

The sluggish rural sales have been attributed to agri-sentiment caused by an uneven monsoon and delayed harvesting across regions.

In urban markets, the delay in reopening schools and colleges, job losses and salary cuts (after the pandemic came), and extended work from home policies have affected sales, said ICRA in a recent report.

“One can also not discount the disruption created by e-two wheelers, which are a lot easier on the wallet with all the incentives and lower running costs,” said a dealer, adding, if one took into account all the high and low speed e-two wheelers launched in the past year and a half, they would constitute 4-5 per cent of the market. 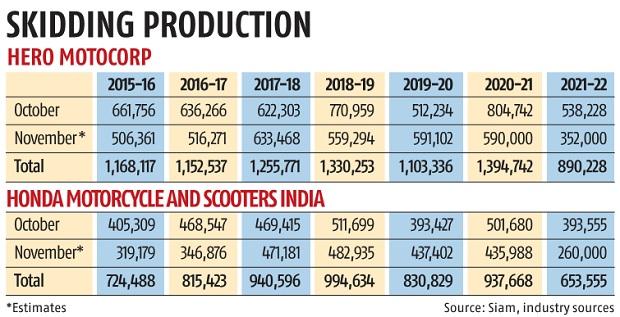 An analyst at a domestic brokerage concurred. “E-two wheelers have started nibbling at the market of internal combustion engine-powered two wheelers.”

“After the festive season, our inventory is for five-six weeks, and with the delay in harvesting due to the late withdrawal of monsoon in many parts of the country and the ongoing marriage season, a pickup in demand is expected,” he pointed out.

The company expects the demand to pick up in the coming quarters on the back of improving macro-economic indicators and vaccination.

Like Hero, HMSI curtailed production in the two aforementioned months. The local arm of the Japanese two-wheeler maker, which, on average, produces more than 800,000 units, made 653,555 in the festive months of the current year, the lowest in seven years.

Though in a smaller proportion, other two-wheeler makers including TVS Motor and Bajaj Auto cut production in October and November to align supply with slow demand and correct inventories at their channels.

ICRA Ratings estimates domestic two-wheel volumes to contract by 1-4 per cent year-on-year in 2021-22, following a weak festive season performance for the industry.

CRISIL Research also estimates two-wheeler sales to end the year with a 3-6 per cent year-on-year decline.