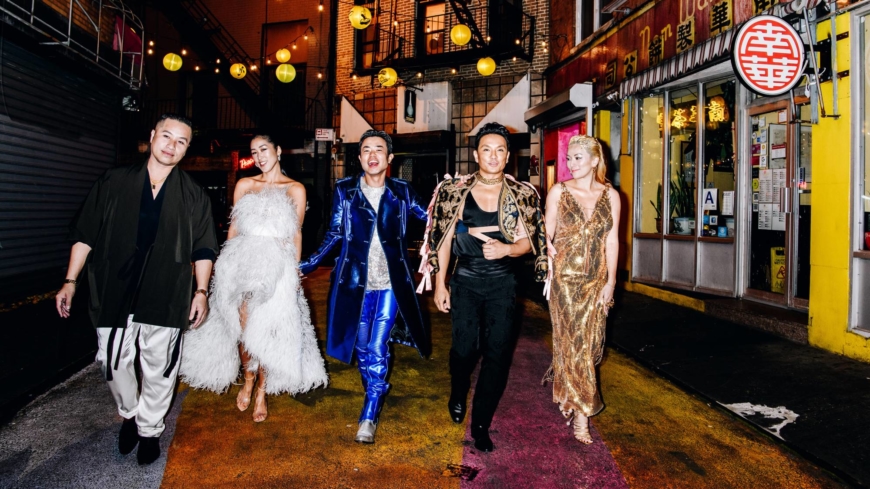 One evening, just before Halloween, a party was held at Chinese Tuxedo, a trendy Cantonese restaurant in Chinatown in the New York City borough of Manhattan. Attendees entered through a back alley lit by yellow lanterns, past graffitied walls covered in posters of superheroes. Inside they sipped Champagne while Asian drag queens, West Dakota, Panthera Lush and Dynasty, writhed around the restaurant’s poles. The evening’s invitation had dictated: “Dress to Slay.”

That was not because guests were about to get bloody, however. They were celebrating the birth of a new kind of superhero.

Forget Shang-Chi. Forget the Eternals. The most unexpected supe debut happened this month online, courtesy of House of Slay, a web comic book series about five Asian best friends who fight the God of Darkness. And who also happen to be real.

Or at least are based on real people. Fashion people, to be exact.

Friends who met through their work but found themselves drawn more closely together by the Asian hate crimes that proliferated during the coronavirus pandemic, the quintet formed a casual support group — they nicknamed themselves the Slaysians — that grew into a broader movement on social media. Now it has become the base of a pop culture fable meant to reach anyone who feels like an outsider, whether they care about fashion or not. Together the animated gang fights an evil overlord whose power grows with every episode of racial discrimination. Love and understanding must prevail to create a world safe for all.

“There are so many kids, especially Asians, that feel othered or who don’t fit in,” Lim says. “Showing these kids that real people like us can become superheroes is so important.”

At a time when everyone from the British royal family to Barack Obama has been turned into a toon, and high-profile celebrities vie to become part of the Marvel Cinematic Universe, it was only a matter of time before fashion — an industry that is, after all, not unaware of trend — and comics collided.

“They are both super visual mediums,” says Alex Lu, the editor who worked on House of Slay. “They both deliver social commentary in a way that is challenging and exciting.”

The Slaysians originally came together largely by accident. Kim and Gurung had worked in the same building for 10 years and started bumping into each other — as well as the rest of the gang — at fashion events. Those chance meetings became nights out at Bubble T, a queer Asian dance party, and dinner parties.

“The first time Phillip invited us over for dinner, I only said yes because I wanted to see his apartment,” Kim says, laughing. “I didn’t think I had time for friends.”

During the pandemic, Lim and Kim sent homemade kimchi and pho to the others via messenger. They met daily for walks on the West Side Highway or grocery trips to Sunrise Mart, the Japanese grocery store. “We made sure we were 6 feet apart and had gloves on,” Leung says. “Remember when we all wore gloves?”

When the Black Lives Matter protests happened, they went together to the front lines. “Growing up, I was taught not to speak up,” William said. “But Prabal and Phillip taught me how to be more vocal.” When the Asian hate crimes were rampant, they shared one another’s fears. (“My 78-year-old mother lives in my building, and she goes for walks every morning,” Gurung says. “I was so worried about her I bought her a blond wig to wear.”)

And they used their social media followings to help spread the hashtag #StopAsianHate and to raise money.

When they started posting photos of themselves, together with the hashtag #Slaysians (a term coined by the music artist Slayrizz, who also performed at the House of Slay opening party), they were flooded with hundreds, some days thousands, of comments, direct messages and emails saying how much they loved seeing this friendship. So they did it more often.

“We come from an industry where you are made into competitors,” Lim says. “The narrative is always, there is only room for one of you or two of you. We realized we could change that by showing us together. A photo of us five was a show of force. It says, ‘We are Asians, and we slay.’ ”

The group had begun discussing whether they should capitalize on their popularity by introducing a product (Slaysian hot sauce?) when Michael Chow, a friend of Lim and a media entrepreneur and investor, reached out, asking if they would be interested in turning their lives into a comic series.

“One day he took me out to dinner and said, ‘What is this Slaysian thing about?’ ” Lim says. “He said we are missing BIPOC narratives in the media world. He convinced me that we could help raise awareness on stories and issues and celebrations in the BIPOC community.”

House of Slay was born.

It took a year to create the comic series, which has been masterminded by Einhorn’s Epic Productions, a company focused on creating comic series for “underserved fandoms.” Every Wednesday at 6:30 p.m., there was a Zoom meeting with the production team to brainstorm narratives about the book. “We didn’t miss a single one,” Gurung says.

The Slaysians received homework, including questionnaires they had to fill out about their upbringing, their fears, their experiences and their dreams to determine which super power would be most fitting. Not to mention which outfit.

After all, the five friends had strong opinions from the start about what their superheroes should wear.

William, for example, wanted something blue for his character. It’s his favorite color, he says, “and all the superheroes I loved growing up, like Sailor Moon and Storm, had a lot of blue.”

Leung’s representative ended up in a gold armor bodysuit with a chain-mail cape and gold high heels. “I feel like such a boss and so powerful when I wear a suit, so that’s my go-to outfit,” she says. “I wanted my whole body to be made of gold and diamonds, but they said it wouldn’t show up in the comic, so now I just have a little bit of diamond crystal heel.”

As for Kim, she says: “Initially I wanted to wear a beige trench coat with black leggings because I am always realistic in the way I approach things.” The response? “That’s too normal, and I have to be more superhero. Now I have a white trench coat with a latex material that is translucent.”

Lim said he wears a green and gold robe “because in a past life I had, I felt like I had a connection to monasteries or was a monk and engaged in a life of service.” But for those moments when his character is feeling a little less serene, one of his arms is also covered in dragon-shaped armor.

Finally, there’s Gurung’s supe, who wears jewelry from Nepal (Gurung is Nepali), black leather and a black cape that changes color to match his powers. “That’s what this project is all about,” he says: “There is power in color.”

“The five also spent a long time talking to Jeremy Holt, the comic book author, so the writer could get to know their personalities. “The way we speak together in the comic, it’s exactly how we talk in real life,” Leung says. “I don’t know how we were captured so well.” Much of what the superheroes go through is inspired by the friends’ real life experiences.

For example, the story begins as our heroes are viewing Asian antiquities at a gallery where, unbeknown to them, a villain is raiding the gallery to steal a rare and powerful artifact that grants him powers of darkness. Later that evening, the good guys discover its opposite: an artifact that grants them powers of light, which they use to fight against hate and intolerance.

Gurung received the power of telepathy and the ability to control other people’s emotions. Lim is bulletproof. Kim gets to teleport (“I hate at the end of the night when I’m tired and I have to wait for an Uber,” she says). Leung can telekinetically move objects, and William has the ability to control the weather. The battles between good and evil don’t occur in grimy back alleys or on the sides of skyscrapers, but at the city’s most exclusive and fashionable sites (names have been changed for the alternate comics-verse).

In one episode they all attend the Met Gala — or rather, its House of Slay stand-in. “I’ve never gone in real life, but at least the superhero me gets to go,” William says.

The digital book is free to read on the comics platform tapas, and the 48-page book will be released weekly, in chapters. Movies, television shows and music may also follow. And House of Slay merchandise — baseball hats, T-shirts and food products — is in the works.

“The fact that I am a real life person who is now a superhero is hilarious, but also really cool,” Lim says. “I am still coming to terms with it.”

US, allies seek arms boycott of Myanmar, end to violence