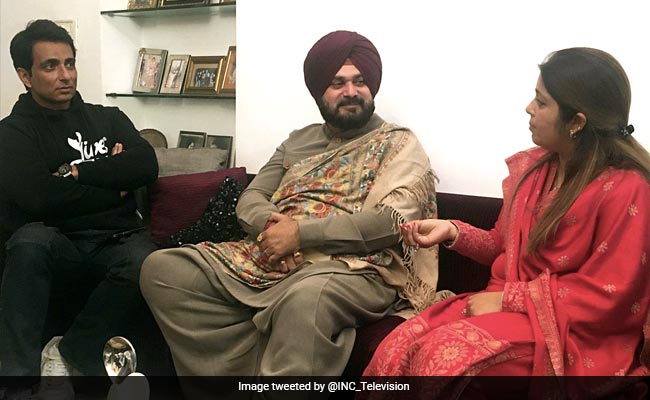 Actor Sonu Sood’s sister, Malvika Sood, will contest the Punjab polls representing the Congress party. Punjab will vote in a single phase on February 14. The votes will be counted on March 10.

The actor, whose work during the Covid crisis has earned him rich praise, said he supports his sister.

Navjot Singh Sidhu, Congress’ Punjab unit chief, described the development as a “game-changer” ahead of the state polls.

Speaking on the occasion, Malvika Sood said she has taken the political plunge to dedicate herself to serve the people.

“It is very rare that a party chief and the chief minister both have gone to someone’s home to grant the honour, and she deserves it,” Mr Sidhu said.

Referring to Malvika Sood’s joining the Congress, Sidhu said, “In the cricketing world, it is called a game-changer.” “She is an young and educated woman, and her education as software engineer will help her in her life ahead,” he said.

The joining in was held at the Sood residence in Punjab’s Moga district where the actor had last year in November said that his sister would join politics.

“It is a matter of great happiness for us that a young woman who has earned a name for herself by running an NGO and dedicated herself to the people’s service is joining our party,” Mr Sidhu said while welcoming her into the Congress.

In November last year, Sonu Sood had announced that his sister will contest t he polls but was tight-lipped about the choice of party.

The Punjab Youth Congress tweeted a picture of Navjot Sidhu, state unit chief, with Sonu Sood captioning it “Picture of the day- ‘Punjab prepares itself for the future.'”

In the 2017 Punjab Assembly polls, the Congress won an absolute majority in the state by winning 77 seats and ousted the SAD-BJP government after 10 years. The Aam Aadmi Party emerged as the second-largest party winning 20 seats in 117-member Punjab Legislative Assembly. The Shiromani Akali Dal (SAD) could only manage to win 15 seats while the BJP secured 3 seats.

Union Budget 2022: Job and income supporting measures to be watched