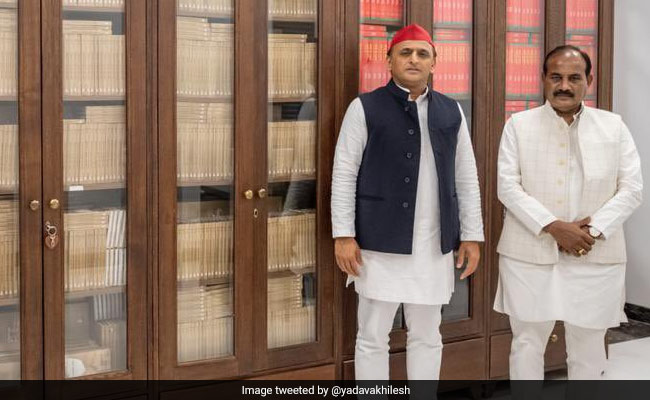 “Hearty welcome and greetings to Dara Singh Chauhan ji, the relentless fighter of the struggle for ‘social justice’! The SP and its allies will unite and take the movement of equality and equality to the extreme… Eliminate discrimination! This is our collective resolve!” Mr Yadav wrote.

“Respect everyone – space for everyone!” the former UP Chief Minister tweeted.

With the tweet Mr Yadav attached a photo of himself standing with Mr Chauhan.

Mr Yadav – enjoying himself as the BJP flounders in the face of high-profile exits so close to voting – tweeted yesterday too, when Swami Prasad Maurya, another influential OBC face, quit his party.

Mr Maurya and Mr Chauhan quitting the UP cabinet and the BJP is a significant setback for the party.

“My move has caused a bhuchaal (earthquake) in the BJP,” Mr Maurya boasted in an interview to NDTV, claiming that more ministers and MLAs would leave the party along with him.

The exits are blowing a hole in the BJP’s OBC leadership before an election where the party’s main challenger is Akhilesh Yadav, and votes from OBC communities are critical.

Mr Yadav has emerged as a major challenger to the BJP’s hopes of re-election.

The Samajwadi Party chief is stitching together an alliance of regional parties to take on the might of Prime Minister Narendra Modi’s party, and has spoken of a “pincer” movement – angry farmers in western UP and angry regional parties (and their voters) in the east.

A shocked BJP hasn’t really responded as yet, except for appeals from UP Deputy Chief Minister Keshav Prasad Maurya, who has urged both Mr Maurya and Mr Chauhan to reconsider.

“If any family member strays, it is very sad. I can only appeal to respected leaders… please don’t get on a sinking ship. Big brother Dara Singh, please reconsider,” Keshav Maurya wrote today.

Uttar Pradesh is a politically crucial state and with a Lok Sabha election due in 2024, results here could play a role in the BJP’s bid for an unprecedented third successive general election win.

The seven-phase Assembly election will begin February 10 and votes will be counted March 10.

TaxWatch: The IRS is looking into reports of families receiving wrong information about child tax credit payments — a problem that could affect their tax refunds