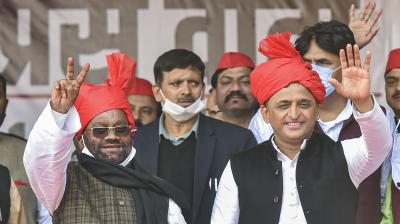 New Delhi: Two former ministers and OBC faces in the Yogi Adityanath-led Uttar Pradesh government — Swami Prasad Maurya and Dharam Singh Saini — joined the Akhilesh Yadav-led Samajwadi Party, on the auspicious occasion of “Makar Sankranti” on Friday when the CM had a “sankranti” meal at a Dalit household in Gorakhpur apparently to counter allegations of the ruling party being “anti-Dalit” as claimed by most of the MLAs, who had quit the saffron party this week.

Resignation of BJP leaders has given rise to perception that the Yadav-dominated SP’s influence among the non-Yadav OBCs in the state is strengthening. Taking a dig at CM Yogi, Mr Yadav said, “BJP’s wickets are falling one after the other, although our CM does not know how to play cricket.” Addressing the new joinees and supporters, Mr Yadav said, “We were waiting for this day. It is election time. Now the handle of the cycle (SP’s poll symbol) is steady, the wheels are in place and all of you are ready to paddle.”

With the Opposition targeting the ruling BJP for being “anti-OBC” and “anti-Dalit” as those who quit the BJP are from the OBC community and had accused the BJP of being “anti-OBC” and “anti-Dalit”, CM Yogi Adityanath’s lunch in a Dalit household was seen as an attempt by the ruling party to counter the growing perception. The BJP, it was learnt, has also asked its allies in UP, including the Apna Dal(S) and Nishad Party, to aggressively counter this perception.

Asserting that the BJP government was working for the development of every section of society without any discrimination, the CM used the occasion to target the SP, saying during their rule, it was “social exploitation” and not “social justice” in the state. He said the SP government had committed dacoity on the rights of Dalits and the poor.

“Only 18,000 houses were given to people under PM Awas Yojna in the full five-year term of the Akhilesh Yadav government in UP, whereas the present BJP government has given 45 lakh houses to the poor and the deprived under the scheme… It was ‘samajik shoshan’ (social exploitation) and not ‘samajik nyay’ (social justice) during the SP rule in UP,” said the CM after having a meal at Amritlal Bharti’s home.

He said 2.61 crore households got toilets and 1.36 crore families benefitted from the Ujjwala Yojana under the “double engine” government, referring to the BJP rule at the Centre and in the state.

“Those in the grip of dynastic politics cannot give justice to any section of society,” he added.

The Assembly polls in Uttar Pradesh will be held in seven phases beginning February 10 and the results will be announced on March 10.

S&P 500 dips as stocks remain in rut this year amid rising rates, Dow down 150 points

Tech Trends: The rise of the self driving enterprise in 2022 & beyond